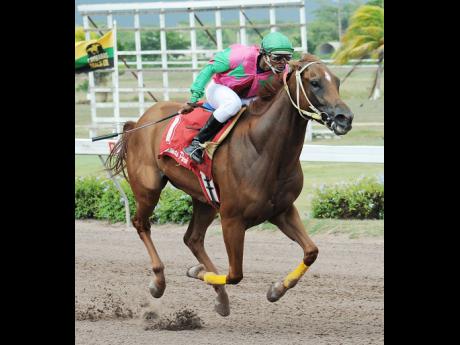 Ian Allen
CLASSICAL TRAIN, ridden by Richard Mairs, canters to an 8 1/2L victory in post-to-post fashion in the fourth race for 3-y-o Claimers ($180,000) over 1,000 metres at Caymanas Park on Wednesday.

Dual Superstakes winner TYPEWRITER makes his seasonal debut at Caymanas Park today in the annual renewal of the open allowance feature over 1820 metres for the Nigel B. Nunes Memorial Cup, but despite his proven class, should fall victim to the very fit hat-trick seeker, FRANFIELD.

Leading jockey Shane Ellis has ridden both horses, but despite his many important wins aboard the Spencer Chung-trained TYPEWRITER (derby, St Leger, Superstakes), has decided to stick with FRANFIELD, on whom he won back-to-back races in June and July, beginning with the Ren Gonzalves Memorial Cup (overnight allowance) over 2000 metres on June 28.

FRANFIELD came back to beat ALL CORRECT in decisive fashion over a mile when stepping up to open allowance company on July 25 and has definitely settled down to his racing with a view to contesting the Superstakes for the second straight year in November.

Last year, the 4-y-o chestnut colt by Traditional out of Supa Lei finished 10 lengths fourth to the Ellis-ridden TYPEWRITER, but is a better horse this year.

Trainer Richard Azan has FRANFIELD (55.0kg) in good nick for today's encounter, and despite the presence of TYPEWRITER, as well as the 2014 Superstakes runner-up UNCLE TAF and the July 4 St Leger winner SUPERLUMINAL (working well) in a seven-strong field, gets the nod in present frame of mind.

TYPEWRITER, who bids for his third consecutive win in this race - having won it with champion jockey Dane Nelson last year - is out for the first time since his unplaced effort as the 2-5 favourite behind PERFECT NEIGHBOUR in the Harry Jackson Memorial Cup last Boxing Day but looked well in a recent seven-furlong exercise spin in 1:29.0.

Now embarking on the first of his Superstakes preps, TYPEWRITER will only go down fighting, with veteran jockey Ian Spence riding him under topweight of 57.0 - the same weight the 6-y-o son of Western Classic-Docs' Paladin won with last year.

However, the choice remains FRANFIELD, who not only has good pace, but will love the distance.

Elsewhere on the 10-race programme, DREAMLINER (working well), who made an impressive debut some weeks ago, should win the day's secondary feature for the Terremoto Trophy for two-year-olds with Robert Halledeen riding for 14-time champion trainer Wayne DaCosta.

I also like FORCE DE JOUR to win the opening race, MARISHA STAR in the fourth, BRAWN to catch them in the fifth, DOC HOLIDAY to repeat at the expense of BRAVE PROSPECT in the sixth and WOMAN IS BOSS to rebound at the expense of TOOTING KAT in the seventh over the straight.