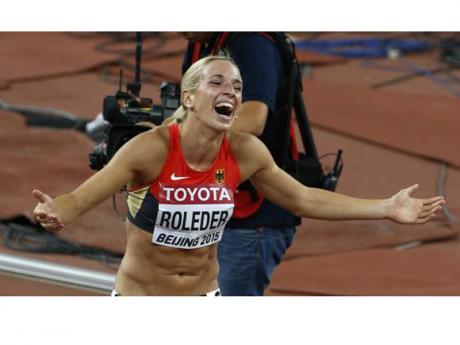 Roleder ... I would like to set the record straight: I simply haven't noticed her in this overwhelming moment. I have seen the TV footage, and to be honest it doesn't look very good. But again: This is a big misunderstanding

The 100m hurdles silver medallist, Germany's Cindy Roleder has apologised for her apparent snub of Jamaican Shermaine Williams after the event on Friday.

But several social media followers have rejected the apology as "fake".

Following the completion of the 100m hurdles, Williams walked  over to Roleder to congratulate her on winning.

Television footage showed Roleder slapping the outstretched hand of Williams before pushing it away.

In her apology on Facebook, Roleder said she did not mean to  be rude but had just been excited about congratulating her friend, the Belarus athlete, Alina Talay on winning the bronze medal.

But Jamaicans did not appear to be forgiving and commented on the German’s post to register their anger. Another questioned: "Why didn't you notice her? is she too black for you? you slap her hand away, as if to say 'get away from me',".

There were however, some people who were empathetic to the German.

"I can't believe how some people can make such a big thing out of such a small mistake of Cindy. Cindy apologised, period.”

Another person said the behaviour of the Jamaicans was wrong.