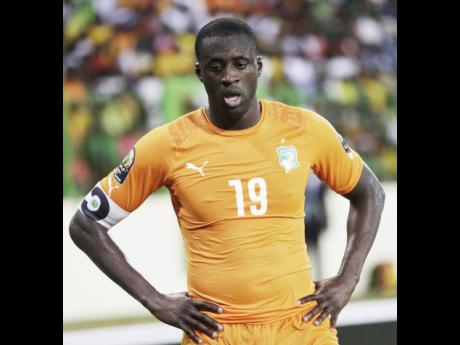 Tropical Storm Erika, which struck the Eastern Caribbean on Thursday, has caused the cancellation of the international boxing show between Jamaica and the British Virgin Islands that was scheduled for tonight at the Olympia Crown Hotel.

Two of the six-man team of boxers from the Virgin Islands arrived on Wednesday, and the other four were scheduled to come in yesterday. Because of the storm, all flights were cancelled, so the remaining boxers were unable to get to Jamaica. The Boxing Board, under whose auspices the show was being held, told The Gleaner yesterday that arrangements will be made to hold the show later in the year.

Yaya Toure asked not to be included in CÙte d'Ivoire's squad for its first 2017 African Cup of Nations qualifier, and coach Michel Dussuyer says the midfielder is in a "period of reflection" over his international career.

Dussuyer met with Toure in London recently over his future with the national team and said in comments published by the Ivorian federation "I hope he will continue his adventure" with national team.

"I told him that I was counting on him. He is a great player and is the captain of the team," Dussuyer said.

Now 32, Toure led CÙte d'Ivoire to their first continental title in 25 years in February, his first international trophy. He said in March he was considering whether to continue his international career.

CÙte d'Ivoire open their qualifying campaign for 2017 against Sierra Leone next weekend.

Blind said he needs a captain with more on-field presence as his team heads into two crucial European Championship qualifiers against Group A leader Iceland and Turkey.

"It's a great honour that the coach asked me to captain Oranje," Robben said in a written statement.

Robben was the undisputed star of the Dutch team that reached the semi-finals of last year's World Cup in Brazil, but the Bayern Munich winger has struggled with injuries for much of the Euro 2016 qualifying campaign.

Van Persie, the Netherlands' all-time top scorer with 49 goals in 98 internationals, said he respected Blind's decision and accepted the role of vice-captain.

Del Bosque called up De Gea, even though he has not played for Manchester United so far this season amid speculation over a possible move to Real Madrid. Former Madrid keeper Iker Casillas is also included in the squad.

"It's true he hasn't been in official competitions, which is a requirement, but we are in the early part of the season," Del Bosque said of De Gea's inclusion, explaining that the player has trained and is ready to play.

Del Bosque said he expected De Gea's club situation was only "temporary" and would be resolved by September 1, when the transfer window will have closed.

"He is a goalkeeper that, like Casillas, we think will defend Spain's goal for many years."