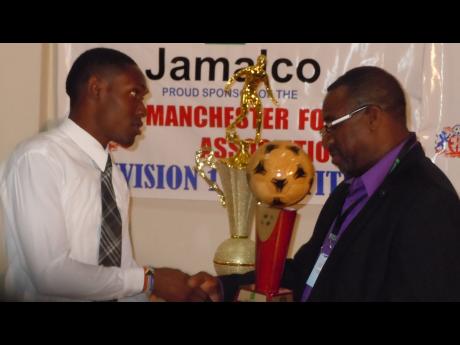 The Gleaner kept their hopes alive for a semi-final spot in Division One of the KSAFA/Western Sports Football Competition, with a 3-2 win over many-time champions Petrojam at Alpha Boys' Home on Monday.

Petrojam, who subsequently emerged KO champions with a 2-0 win over Carib Cement on Wednesday for coach Lenworth Hyde, opened the scoring through Boys' Town Premier League player, Rafeik Thomas, in the 28th minute.

The Gleaner levelled the score late in the first half via a penalty from Locksley Thompson.

In the second half, The Gleaner gained the ascendancy with some creative plays and was rewarded with a goal from their prolific striker, Fabian Nethersole, in the 68th minute. They went further ahead in the 83rd minute when Norman 'Ball Vibes' Bailey netted for the Ian Barnett-coached Gleaner team. Petrojam got a late goal through Arnett Gardens' Premier League player, Leon Strickland, almost on the stroke of full time.

Scotiabank and Carib Cement will meet in a crucial encounter this afternoon at Winchester Park and neither can afford to lose if they hope to make the semis. Defending champions Metrodade, who are unbeaten in the league, lead the standing, ahead of GraceKennedy and Petrojam. The fourth and final semi-final spot will be decided among Scotia, Carib Cement and The Gleaner, who have completed their preliminary round fixture with 18 points.

At the end of the match, Lyndel Wright, a former Jamaica Cricket Association president and coordinator

of the league, handed over the championship trophy to Waltham Court.

DB Basovak FC are the 2015 champ-ions of the St Catherine FA U-17 Football League. DB Basovak won 4-2 on penalties after both teams were locked 0-0 after regulation and extra-time.

The competition consists of teams based in Portmore communities, including Waterford, Portsmouth, Bridgeport, Westmeade, Cumberland.

The aim of the league is to foster unity between people from different communities in the constituency.

The semi-finals of the 2015 Jamalco Football League will kick off today at the Wembley Centre of Excellence, with Napoli tackling Railroad at 4 p.m.

The second semi-final, featuring Top Hill and Sunset, will be played at the same venue tomorrow at a similar time. Extra-time and penalties will be used if necessary to decide the finalists.

Last weekend's quarter-finals produced a few surprises. Mocho were eliminated when they were unbelievably swamped 4-1 by Napoli. The former champions had finished the preliminary round with a perfect win record and were seen as one of the title favourites.

The second semi-final was more closely contested, with Sunset winning 2-1. Wembley took the lead in the 33rd minute. Sunset's woes were further compounded when they were reduced to 10 players late in the first half.

Sunset, however, equalised early in the second half and were kept in the game through the brilliance of their goalkeeper. A quick counter-attack resulted in Sunset getting a penalty, which was converted in the 68th minute. Wembley then went on an all-out attack, but they were again thwarted by Sunset's custodian, and could not produce any more goals.

The final should get under way at

3 p.m. and features Royal Flat against Chester Divas. Defending champions Legendary were eliminated when they were beaten 23-20 by Genocide in the semi-finals.

Chester Divas earned their first finals berth after outscoring Royal Flat 24-15. Today's program also features a third place play-off and closing rally of all the teams which failed to make it to the semi-finals.

Defending champion Connection and newcomers Sporting Academy will contest the final of the Western Union-sponsored Porus Summer Youth Football League. The game will be hosted at the Porus Community Centre in Manchester, beginning at 3:30 p.m.

The third place play-off between Settlement and Rising Star will kick off at 2 p.m. A closing ceremony and presentation of awards will follow the championship game.

The league caters to community Youths in the Greenvale area and its environs. Ten teams are taking part. In the other match played last weekend, Texas and Scot Town drew 1-1.

Two matches are hosted each Sunday.

In the first semi-final, Woodstock beat Chatsworth 2-0 courtesy of goals scored in the second half by Sheldon Davis (46th minute) and Oshane Dunkley (47th).

Former national invitee, Damion Harwood, who had a brilliant game for Chatsworth, failed to get his name on the scoresheet, despite firing home a number of powerful shots, which either hit the woodwork or were brilliantly saved by the goalkeeper.

In the second game, Uptown of Buff Bay defeated defending champions Hope Bay by a similar margin of 2-0, after completely dominating both halves.

The goals were scored by playmaker Rushane Taylor in the 56th minute and Demar Casington in the 60th.

The final will be played tomorrow at 6 p.m., with the winner set to earn $100,000, along with the championship trophy, while the runner-up will receive $50,000. Other sectional prizes are up for grabs, including leading goalscorer, most disciplined team, player of the tournament and the fair play award.

Sponsorship totalled $1,300,000 and 32 clubs from 37 communities in West Portland took part in the competition.