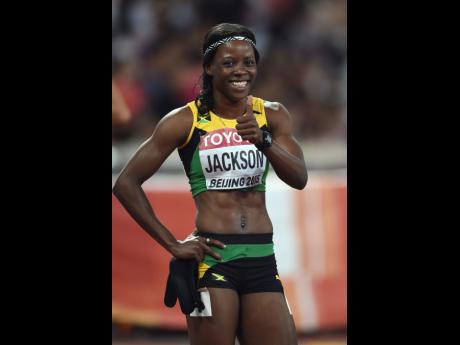 Ricardo Makyn
Shericka Jackson: We have the national record in mind.

Jamaica's women's 4x400 metres team will be hunting the national record when they line up in today's final at the IAAF World Championships in Beijing, China.

That was the word following their qualification yesterday as the team of Christine Day, Chrisann Gordon, Shericka Jackson and Anastasia Le-Roy easily secured their spot in the final with a 3:23.62 finish for second place in their heat.

With Stephenie-Ann McPherson and Novlene Williams-Mills expected to come in to replace Le-Roy and Gordon for the final, which faces the starter at 7:05 a.m. (Jamaica time), the Jamaicans are liking their chances of testing the 3:18.71 national record mark, which was registered at the 2011 World Championships in Daegu, South Korea.

"God is good. We made it to the final and we are really happy that we get another chance to prove ourselves and we are trying to put up a show tomorrow (today) to show how great we can be on the relay," said Day after the run.

"We are going after the national record, so we know that we will have to be very fast because Jamaica has a pretty fast time already and so once we can go below that we know that we have a pretty good chance to compete with anyone here and get a medal," Day continued.

Individual 400m bronze medallist Shericka Jackson said she was confident in the team's ability to meet its targets and improve the record and get on the podium.

"We have the national record in mind and I'm always a person who have confidence in my teammates no matter who we are up against. I'm always confident," Jackson said. "We know it won't be as easy as it was here in the heats, but we will do our best and we can hope that it's good enough."