Fantastic women strike gold, men miss out on a medal in 4X400 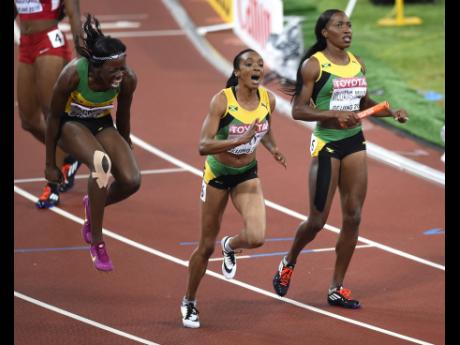 Jamaica's women delivered another historic performance to cop the country's seventh gold when they beat the rest of the world in the 2015  IAAF World Championships 4X400m final.

In the men's equivalent, Javon Francis ran a brilliant race to bring back the Jamaican into contention, even leading at one time, but could not hold and was eventually overtaken by the Americans who ended first.

Trinidad and Tobago was second and Great Britain third with similar time as Jamaica in the men's 4X400.

The women, however, took the early lead through Shericka Jackson on the second leg and maintained it until the third leg when America's Allyson Felix chopped down Jamaica's 20 metre lead to hand over the baton first to Francena McCrory on anchor.

When Jamaica's Novelene Williams Mills took the baton she saved the energy for the late surge to take Jamaica home in a world leading time of 3.19.13.

The Americans were placed second and Great Britain, third.

This is only the second time that Jamaica has won the event, the first being in Edmonton in 2001.

The golden run by the 4X400m women has pushed Jamaica's medal tally to 12 - seven gold, two silver and three bronze.