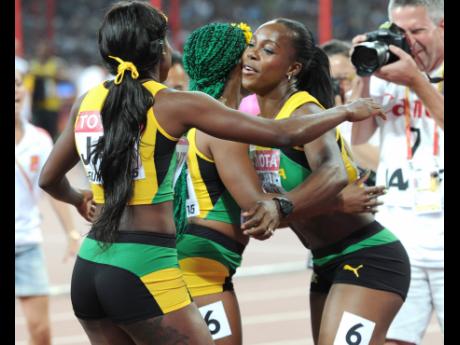 Jamaica's women went into their 4x100m final at the IAAF World Championships yesterday hunting the world record, but are certainly not complaining about what they left with - another gold medal and the fastest time ever recorded at the event.

After a bullet-start from Veronica Campbell-Brown, who was starting a relay for the first time since the 2000 World Junior Championships in Santiago Chile, the Jamaicans consolidated in the middle legs with youngsters Natasha Morrison and Elaine Thompson holding the advantage before releasing Fraser-Pryce on anchor.

The 100m gold medallist raced across the line in 41.07 seconds, two hundredths of a second faster than the old championships record that they themselves set at the last installment of the championships in Moscow, Russia.

The United States were second in 41.68, while Trinidad and Tobago claimed their first medal in this event in 42.03 - a national record.

"I feel good! We ran a championship record and it's just wonderful that we came out here as a team and were able to accomplish this. We are really excited! Yes! We thought about the world record but it didn't happen. Maybe next time; however, we are satisfied with what we got tonight and look forward to more," said Fraser-Pryce.

"We knew we had a solid team so it was all about arranging the team the right way. We went out as a team, we did wonderfully. I don't think we could ask for anything else," added Fraser-Pryce, who also commented on Jamaica's win in the men's 4x100m.

Campbell-Brown was also thankful for the result.

"I think it was good. We are happy for the result. This is my second time running the first leg. I ran it way back while competing at the World Junior Championships a long time ago. It felt okay. The objective was to come out here, get the baton around, and ensure we got the win," said Campbell-Brown, who played down her leg and applauded Morrison's and Thompson's efforts.