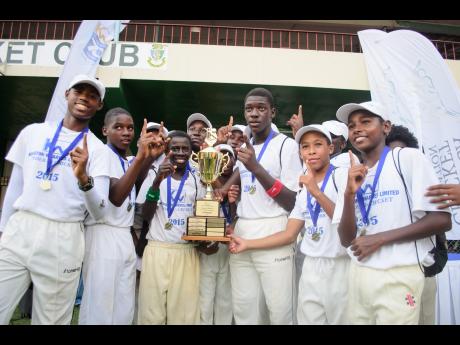 Contributed
Members of the Kingston Under-15 cricket team celebrating with the Kingston Wharves trophy at Sabina Park last Friday.

As Kingston Wharves Limited (KWL) celebrates its 70th anniversary and 26 years as title sponsors of the competition, Kingston have achieved what could be considered a memorable victory.

Scores: Kingston, 171 for nine in their allotted 40 overs; St Elizabeth, 112 all out. George Seymour led the way for Kingston with 50 not out while Razzaq Williams scored 48.

In the bowling department, Rajiv Redhi bagged 4 for 26 from eight overs. He was supported by Matthew Comrie, 2-for 10, and Akeem Malcolm, 2-for 27.

"We had too many extras - 40. The boys didn't maintain their discipline and dropped some catches, so we let ourselves down by not doing the basics right," Bromfield said.

"Young men, this is your starting ground. All the big-named players - Chris Gayle, Marlon Samuels, Jerome Taylor, even Stafanie Taylor - they all came through Kingston Wharves Under-15, so you are having a good launching pad," he said.

Kingston Wharves awarded four cash bursaries to the most valuable players from the four semi-finalists, and their total sponsorship package is worth approximately $5 million annually.