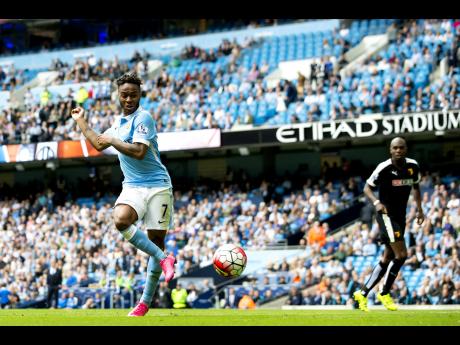 Breaking a 103-year club record, Manchester City reeled off its 10th straight Premier League victory on Saturday. For Jose Mourinho, a landmark day produced an unwelcome result, with his 100th home league game in charge of Chelsea ending in only a second loss.

City's fourth success of the new season was a 2-0 victory over Watford, with US$76-million signing Raheem Sterling scoring his first league goal for Manuel Pellegrini's side, which looks irresistible in its quest to regain the trophy from Chelsea.

Fortunately for City, whose other goal was scored by Fernandinho, Chelsea appear to be imploding.

A 2-1 loss to Crystal Palace left Chelsea with only four points from four games heading into the international break.

Although Radamel Falcao cancelled out Bakary Sako's Palace opener by heading in his first Chelsea goal in the 79th minute, the south London visitors were back in front inside two minutes through Joel Ward.

Already, Chelsea are eight points adrift of early leaders City. It's a daunting gap, but Mourinho knows how easy it is to throw away a lead.

Before winning the title by eight points in May, Chelsea recovered from conceding the same advantage over City midway through the season.

Liverpool harbour ambitions of winning a 19th title - the first since 1990 - but could struggle to just return to the top four as yesterday's 3-0 home capitulation to West Ham demonstrated.

On the day Palace won at Chelsea for the first time since 1982, West Ham ended an even longer winless run at Anfield stretching back to 1963.

Manuel Lanzini and Mark Noble sent West Ham into a half-time lead. Although Liverpool had Philippe Coutinho sent off at the start of the second half, Noble was also dismissed before Diafra Sakho completed West Ham's second away win of the season.

The league campaign started for West Ham under Slaven Bilic with a win at Arsenal, who have recovered from that opening-day setback to collect seven points from nine.

Arsenal relied on Fabricio Coloccini's own goal to win 1-0 at Newcastle despite the hosts playing for 75 minutes with 10 men after Aleksandar Mitrovic was dismissed.

There were two red cards at Stoke, shown to two home players - Ibrahim Afellay and Charlie Adam - within seven minutes against West Bromwich Albion. Despite playing with nine men from the 31st, West Brom only edged a 1-0 win through Salomon Rondon's header.

Like Stoke, Sunderland are still searching for their first win of the season after being held 2-2 at Aston Villa.

Bournemouth, playing their first-ever season in the top flight, have four points from four after drawing 1-1 with Leicester.

In the day's late game, hosts Tottenham Hotspurs were held to a 0-0 scoreline by Everton.