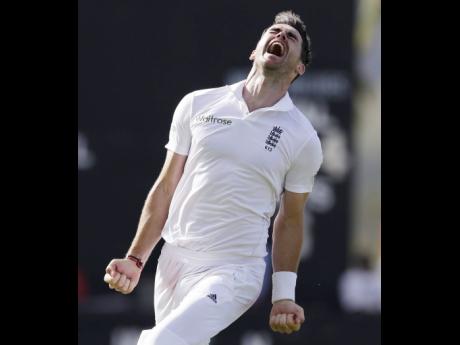 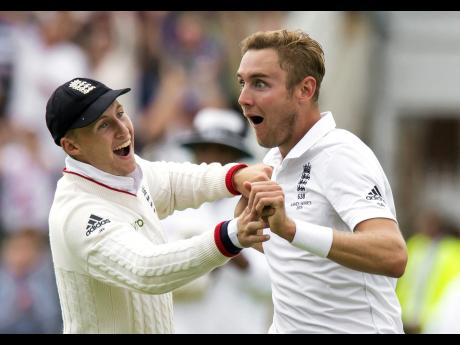 File
England's Stuart Broad (right) celebrates with teammate Joe Root after a catch by Ben Stokes to dismiss Australia's Adam Voges for one on the first day of the fourth Ashes Test.
1
2

In the early days before the 2015 Ashes got under way, England were playing so badly and Australia so well that Australia were installed as favourites to win the coveted urn.

By the time Australia had dominated the World Cup, however, by the time they ran rough-shod over the West Indies, especially with England suffering badly during that time, losing to Bangladesh and not coming out of the first round of the World Cup, and when they were later bowled out of for 123 in the second innings and lost to the West Indies at Kensington Oval, the Aussies were riding high, very high.

The Australians, with Steven Smith, Michael Clarke, David Warner, Chris Rogers, and Shane Watson as batsmen, and with a pace attack to come from pacers Mitchell Johnson, Mitchell Starc, Josh Hazlewood, Pat Cummins, Peter Siddle, and spinner Nathan Lyon, were overwhelming favourites not only to win the Ashes, but also to demolish England.

For Australia, it would be, or it was supposed to be, almost like taking candy from a new-born babe.

We had also forgotten the glorious uncertainty of cricket, the many thrilling and exciting surprises it sometimes has in store for its fans. We also forgot that playing cricket in England is like playing in no other place, not even, probably, in New Zealand, and we also forgot the importance of winning the toss and what to do when you have won it.

England, after warming up with a drawn 1-1 series against a plucky New Zealand, completely and shockingly overturned the form book in winning the Ashes, 3-2, in no uncertain manner, a result which led to the retirement of the humbled Australian captain.

MOTHER OF ALL BEATINGS

After surprisingly winning the first Test in Cardiff by 169 runs, and after losing their way in a 405-run thrashing at Lord's, a loss which suggested that the Australians were back and that England's victory at Cardiff was just a mirage, England came out firing and won the third and fourth Test matches, one at Edgbaston by eight wickets, one at Trent Bridge by an innings and 78 runs, before losing the fifth Test at The Oval by an innings and 46 runs.

It was, all things considered, probably the mother of all beatings. It is true Australia made 566 for eight declared with Smith stroking 215 at Lord's and 481 at The Oval with Smith getting 143, but they made nothing else to write home about.

The mighty Australia, the never-say-die Australia, the team which hardly ever bowed to anyone, were dismissed, apart from the Lord's and Oval Test matches, almost without a fight and for scores of 308 and 242, 136 and 265, and for 60 and 253.

In fact, the entire series was peculiar, with three Test matches ending in four days and two in three, and with the losing team, Australia, also winning two Test matches easily and convincingly.

It is true that the pitches at Edgbaston and Trent Bridge were tailor-made for England's seamers, but the English bowlers used them wonderfully. Unlike the Australian bowlers, who are accustomed to hard, fast, bouncy pitches, the English bowlers pitched the ball up and got it to swing and to seam.

At Edgbaston, the conditions were just what England ordered. They bowled first, and Anderson, with six for 47 in the first innings, and Steven Finn, with six for 79 in the second innings, buried Australia.

At Trent Bridge, and with Anderson out, the pitch was again just what England ordered and the conditions were in their favour. They again bowled after losing the toss, and Stuart Broad nailed them unceremoniously.

In one of the great spells of bowling, Broad ambushed Australia and cut them down for a paltry 60 runs with figures of 9.3 overs, five maidens, 15 runs, and eight wickets.

Some, including the Australian batsmen, may blame the pitch, but although the conditions changed a bit after Australia had batted, especially at Trent Bridge, when it is remembered that England were 274 for four at close on the opening day, it must have been fast bowling, pure and simple, at its best: two wickets in the first over of the match, five wickets in 19 balls, 29 for six in the first 35 minutes, and Australia dismissed in 18.3 overs in 93 minutes, 27 minutes before lunch.

The England catching was brilliant, or rather magnificent, especially one taken by Ben Stokes at fifth slip to dismiss Adam Voges off Broad. With Broad pitching the ball up and getting it to swing, every one of his wickets, all eight, were caught in the slips.

The toss is usually blamed for such embarrassment but this time that could not have been the case.

Sixty all out was embarrassing, especially in an Ashes series, and as it turned out, it was dust to dust, ashes to ashes for Australia. It was a case of, in a series of relatively poor batting, and if Anderson and Broad didn't get you, then Finn or Stokes must.

The usually proud and arrogant Aussies will remember this contest for a long, long time; one that England will also always remember, probably forever.