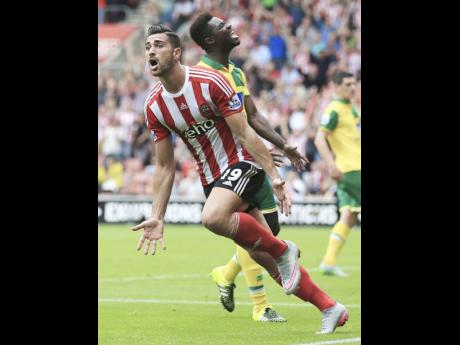 Leicester City maintained their unbeaten start to the Barclays Premier League season thanks to a late penalty from Jamie Vardy. Callum Wilson opened the scoring for the home side with a spectacular bicycle kick, but Vardy levelled from the penalty spot after being fouled in the box with four minutes left to play.

Scott Sinclair added two more goals top his midweek hat-trick, but Sunderland stole a point, thanks to Jermain Lens' second-half equaliser. Villa forward Sinclair netted three goals in the Capital One Cup against Notts County, but Sunderland opened the scoring through Yann M'Vila, who found the target from 20 yards. Sinclair replied with a brace before the interval, including a penalty, but Lens stole a point.

Jose Mourinho's 200th Barclays Premier League game in charge of Chelsea - and 100th at Stamford Bridge - ended in only his second home defeat as the club's poor start continued. Palace took the lead when BakarySako drove in after Yannick Bolasie's low cross. Chelsea responded when substitute Radamel Falcao headed in his first goal for the club. Palace regained the lead immediately as Joel Ward nodded in a late winner.

West Ham rewrote the record books when they won in the league at Anfield for the first time since 1963. Liverpool had kept three clean sheets, but the Hammers were outstanding, with Manuel Lanzini scoring within three minutes of his debut. He then set up the second for Mark Noble, who became the second player sent off after Philippe Coutinho was red carded for Liverpool. Diafra Sakho added a third for West Ham in injury time.

Raheem Sterling's first goal for Manchester City maintained the club's perfect start to the season. The game changed 88 seconds after the interval when Sterling converted Bacary Sagna's cross and Fernandinho made it 2-0 with a fierce finish from David Silva's pass.

Watford did not manage a single shot on target as City saw out the win to move three points clear at the top.

Arsenal benefitted from another own goal - their second out of three scored in the Barclays Premier League - against the 10 men of Newcastle. The hosts lost striker Aleksandar Mitrovicwhen he was sent off in the 16th minute for a rash challenge on Gunners midfielder Francis Coquelin. Arsenal scored early in the second half when winger Alex Oxlade-Chamberlain's angled shot on the rebound clipped Fabricio Coloccini's heel on its way into the net.

Stoke were reduced to nine men as WBA secured their first win of the season, thanks to a first goal from club record signing Salomon Rondon. The home side controversially lost Ibrahim Afellay after 25 minutes and then Charlie Adam walked five minutes later before PS12 million Rondon headed home Rickie Lambert's cross.

Tottenham were left waiting for their first win of the season after being held to a goalless draw by Everton at White Hart Lane. Harry Kane had the home side's best chance when he was sent clear, but Toffees goalkeeper Tim Howard saved. Jan Vertonghen also skimmed the bar for Tottenham, while Tom Cleverley, who was later carried off on a stretcher, went closest for Everton.