Bolt points to Rio with more gold in his hands 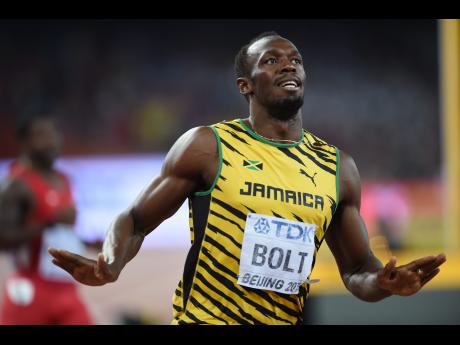 Hard as this is to believe, there were questions about Usain Bolt when the World Championships first started.

Yes, yes, and a resounding yes.

The Jamaican great left the Bird's Nest with three more gold medals and ended any suspicions about his dominance. Just in time, too, with the Olympic track competition in Rio de Janeiro starting 49 weeks from now.

All the doubts about Bolt - his fitness and whether Justin Gatlin might be primed to beat him - only provided more fuel.

"People pretty much counted me out this season," Bolt said. "They said, 'He's not going to make it. That's it for him.' I came out and proved you can never count Usain Bolt out. I'm a champion and I'll show up when it matters."

As if there was ever a doubt.

The only thing that tripped him up was a clumsy cameraman who ran into him from behind on a two-wheel motorised vehicle. He even bounced back from that, anchoring the 4x100m relay team to gold after winning the 100 and 200 on his own.

One thing that became clear as the meet went on is that Bolt doesn't just beat people by being faster, he gets in their heads, too.

Gatlin lost the 100 on a last-second lean that many viewed as a pressure-induced mistake. The U.S. relay team missed the handoff - and Bolt said he pretty much expected that.

"We just know the key thing is just to get the baton around. Doesn't matter," Bolt said. "Because the US knows we always have the best team, they tend to panic. Pressure gets to them sometimes."

Gatlin appears to be the only man with the speed to push Bolt. Beating him is another matter.

"What will it take?" Gatlin said. "It will take staying in front. That's what it's going to take."

Good luck with that.

Here are some other things we learned from the World Championships in Beijing:

GIVE 'EM A HAND

Once again, the Americans struggled getting the baton around the track. The men's 4x100m relay was disqualified for stepping outside its lane on an exchange between Tyson Gay and Mike Rodgers. That marked the eighth time since 1995 the American men have either been disqualified or failed to finish at the Worlds or the Olympics. The women's 4x400m squad wasn't clean on an exchange between Allyson Felix and Francena McCorory, opening the door for a Jamaican win. The U.S. has gone to camps to fix these foibles. Bottom line: It may simply be between the ears.

Kenya finished with 16 medals - and not one in the men's marathon. Javelin thrower Julius Yego won the first gold medal in a field event for a country renowned for distance running.