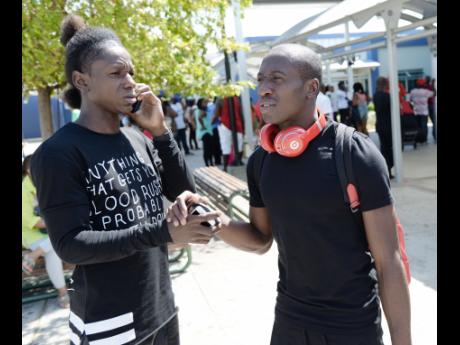 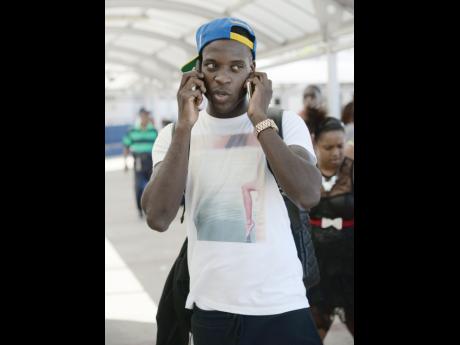 Jermaine Barnaby
Reggae Boy Je-Vaughn Watson is engaged in a cellphone conversation on his arrival at the Norman Manley International Airport yesterday.
1
2

Reggae Boyz forward Darren Mattocks wants the team to give local fans a treat and replicate their Gold Cup and Copa America performances in their opening World Cup qualifier against Nicaragua on Friday.

Another Reggae Boy, midfielder Je-Vaughn Watson, says nothing but a victory will be satisfactory.

The pair, who arrived at the Norman Manley International Airport yesterday afternoon, along with Demar Phillips, will make-up the squad for their opening World Cup qualifier.

The match is the opening leg of a home and away series, which will see the winner advancing and the loser eliminated. The second-leg takes place in Nicaragua on Tuesday, September 8.

Mattocks and Watson admitted not knowing the opponent, but insisted they will not underestimate the Central Americans.

"We are up for the challenge," Mattocks told The Gleaner. "There is a lot of confidence in the team and we are playing well, so it is something to look forward to.

"We have put the Gold Cup behind us as are entering a new phase and a new challenge and we are ready for it," he assured.

"I don't even know how much they (Nicaragua) are ranked, but that is how serious we are. It doesn't matter who we play and if they are ranked in the 100s or outside the 100s. We approach all games the same with discipline and hard work, so we are not going to take no team for granted because in football you have upsets and we don't want that, so we are going to approach that game like it's USA in the semi-finals (Gold Cup)," Mattocks stated.

Watson had similar views in his assessment.

"We know nothing about them, but they might know how we are doing based on (performance) the Gold Cup. But no matter who, we always respect our opponent. We have to play our style of football because the coach Schafer (Winfried) has been doing a good job and we are getting good results," said Watson.

Mattocks scored two goals in the Gold Cup, one in the semi-final against hosts USA and the Vancouver Whitecaps striker is hoping the team can treat local fans to some of the good football they only got to witness on television, live at the National Stadium on Friday.

"Most our overseas fans came to watch us (Gold Cup) and were really pleased. But the real die hard fans are in Jamaica, so what we did in the Gold Cup and Copa America we want to bring back home. We expect a big turn out and we are hoping to deliver on these two games," Mattocks said.

"So I just want all the fans to come out, we want it to be a sold out game and we want to treat the Jamaican fans to a good performance," the striker added.

FC Dallas midfielder Watson says the World Cup is what the team has been preparing for and the players have nothing but victory on their mind.

"World Cup qualifiers is the bigger picture, every game is important, you want to win every game and we are going to do whatever we have to do to make sure we come out victorious," said Watson.

"It's going to be a tough task, but we just have to go out there with a lot of confidence and make sure we score goals. We are playing at home and there is no way we want to tie or lose the game," he said.