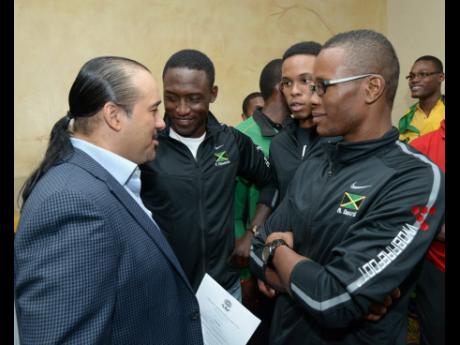 File
McKay (left) engages in conversation with Dusard, while Edwards (second left) reflects. All three are members of the Jamaica contingent heading to Siberia.

JAMAICA's combined martial arts team departs the island tomorrow, headed for the Siberian town of Khanty-Mansiysk, Russia, on the invitation of the All Russian Taekwon-Do ITF Federation.

A three-man Jamaica team is down to face hosts Russia, Greece and Germany in the Four Nations Cup set for Sunday.

Captain Nicholas Dusard and Olympian Kenneth Edwards lead the charge for Jamaica, which will field a new invitee, Calabar High School's Trevor Webb Jr, who has been kicking up a storm in the McKay Security High School Tae Kwon Do league.

Jason McKay travels as Webb's coach, whereas the experienced pair of Dusard and Edwards will be under the guidance of Master Claude Chin.

"It's the first time fighting in Russia for me, but Kenneth was there earlier this year for the World Taekwondo Federation's World Championships," Dusard told The Gleaner.

"I am very familiar with the Russian fighters, not the Greek fighters," said Dusard.

"Though I am not sure which of the Russians are coming, I am familiar with their better fighters," he added.

"I am also familiar with Germany. They have a very strong team. I know it will be a very good competition, but I am clueless to the Greek fighters. I don't know them at all," the team captain added.

Meanwhile, former captain McKay said it was undecided whether Jamaica would fight in the team event or individuals.

"Though it's a team championship, we are unsure whether we are entering a team. The combined team only fights in tournaments which guarantee equal umpiring representation - host and visitor, or neutral," he explained.

"That's the only uncertainty, but we will definitely fight individuals," McKay added, pointing out that Webb will be under scrutiny, fighting in the -68 kilograms division.

"He is considered one of our more promising teens since the transition of Akino Lindsay to the adult ranks," he said.