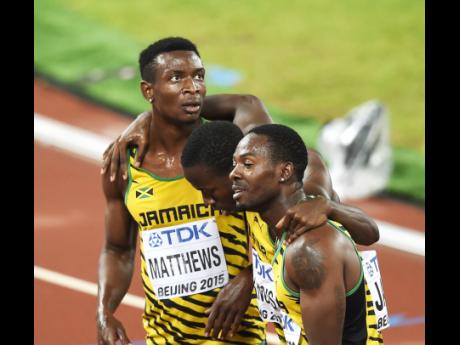 When Sanjay Ayre slipped from the silver-medal spot to fourth place in the men's 4x400m final in the space of a few metres at the 2007 World Championships in Osaka, Japan, it hurt.

Not even that colossal anchor leg failure could have given as much grief as Jamaica's agonising fourth-place finish on the final day of the 2015 IAAF World Championships in Beijing, China, yesterday.

The team of Peter Matthews, Ricardo Chambers, Rusheen McDonald, and Javon Francis clocked 2:58.51, the same time as bronze-medal winners Great Britain and Northern Ireland, with the USA running away with the gold medal in 2:57.82 and Trinidad and Tobago getting the silver in 2:58.20.

The Jamaicans were in a good position up to the third leg, when McDonald slipped to almost sixth, before handing over the baton to Francis.

Francis wasted little time in moving to the front of the pack, showing his 20.58 200-metre speed at the first opportunity. It looked familiar, as his 44.00 split from the Moscow 2013 World Championships, which dragged Jamaica from fifth to second in the event, looked like it was about to repeat itself.

As brave as he was, Francis faded towards the end and was caught on the 100m stretch. Clinging for dear life to the bronze medal now, the Jamaican stepped across the line as Great Britain and Northern Ireland's Martyn Rooney clipped him for third, despite both times being rounded up to reflect 2:58.51, as was confirmed by the photo-finish camera.

It was a heart-crushing defeat. Francis was devastated.

"From I have been losing races, this is one of the most hurtful losses I have ever experienced," lamented Chambers. "But we came out here as a team, and we fought as a team, but today we didn't have enough to win.

"We got the same time as Great Britain, but we just have to accept the result and move on to next year and different targets," added Chambers.

The Jamaican team management didn't readily accept the result, as they had the tape reviewed to see if they could have gotten a share of the bronze medal.

"To be honest, I am really disappointed that we didn't make the podium, but we are thankful at the same time," said Peter Matthews. "I am really feeling hurt, and I'm sure the other fellows are as well; we really wanted this."

Matthews is hoping that the team can stay together and believes that the capability is there for a medal at next year's Olympic Games.

"With everyone, healthy next year, we have a good chance of even winning the 4x400m in Rio. We had a good side this year, but the competition was also very good, too," Matthews said.