Sri Lanka fight back by grabbing early wickets against India 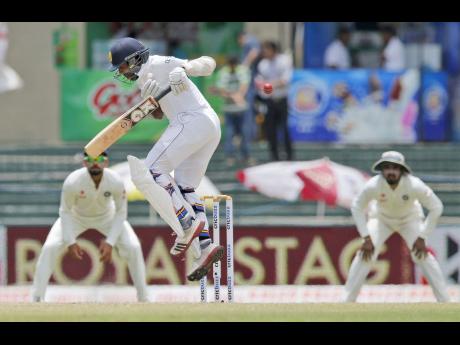 AP
Sri Lanka's Dhammika Prasda is hit by a delivery from India's Ishant Sharma on the third day of their third Test cricket match in Colombo, Sri Lanka, yesterday.

A total of 15 wickets fell on the third day on a lively Sinhalese Sports Club pitch that assisted seam bowling.

Prasad struck with the second ball of India's second innings to dismiss first-innings centurion Cheteshwar Pujara with no score on the board.

Pradeep bowled Lokesh Rahul (2) and trapped Ajinkya Rahane lbw for four, as India went from 2-2 to 7-3.

Captain Virat Kohli (1) was undefeated with Rohit Sharma (14) when rain forced an early close of play.

"There is a big chance to win, because we have them three down," Perera said. "The morning session is crucial for us. If we get two or three wickets, there is a good chance."

Earlier, Indian fast bowler Ishant Sharma picked up a seventh five-wicket haul in Test cricket to help India bowl out Sri Lanka for 201 after India made 312 in their first innings.

Sharma, who along with Stuart Binny rattled Sri Lanka's top order, finished with 5-54.

Sri Lanka lost six wickets for only 47 runs and were facing the prospect of a follow-on when Kusal Perera scored 55 on his Test debut and shared a 79-run stand for the seventh wicket with Rangana Herath, to carry Sri Lanka past the mark.

Herath made 49, and Sri Lanka's total was helped by tailenders Prasad (27) and Tharindu Kaushal (16).

Perera's resistance came after his last specialist batting partner, Lahiru Thirmanne, was out and Prasad had left the field temporarily with an injured hand. Perera batted in his usual attacking style and scored his runs off 56 balls, including nine boundaries.

Resuming the day on 292-8, India opener Cheteshwar Pujara carried his bat through the first innings to finish unbeaten on 145. Pujara, brought in to replace injured Murali Vijay, faced 289 deliveries in his knock and hit 14 boundaries. He and Mishra (59) had shared a 104-run eighth-wicket stand after India lost seven wickets for just 180.