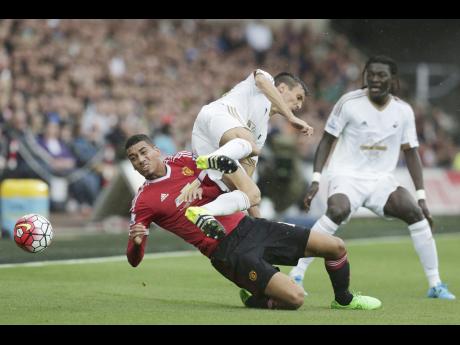 Manchester United's early-season problems at both ends of the pitch were exposed in a 2-1 loss at Swansea yesterday that ended their unbeaten start in the English Premier League.

On the day Manchester City spent more than 50 million pounds ($77 million) on another attacking player, their cross-town rivals again showed a lack of cutting edge up front to turn dominance and good build-up play into goals.

United were comfortable and perhaps should have been more than 1-0 ahead, through Juan Mata's 49th-minute strike, when Swansea launched their comeback with two goals in five minutes from Andre Ayew and Bafetimbi Gomis.

Gomis' winner in the 66th minute capped a brilliant, sweeping team move, but should have been kept out by goalkeeper Sergio Romero, who failed to stop a low shot at his near post. Romero is only playing because United's first-choice goalkeeper, David de Gea, isn't being picked while he is linked with a move to Real Madrid.

With Europe's summer transfer window closing in England tomorrow, United have two days to resolve their goalkeeper situation and decide whether to sign a new striker to help out Wayne Rooney, who is yet to score in the Premier League since April.

"I have enjoyed our football," United manager Louis van Gaal said. "But you need the result and we lost again."

Swansea have no such problems up front. Gomis, who scored for the fourth straight game this season, and summer signing Ayew have netted all seven of the team's goals in the league and that combination is the reason why Swansea are fourth in the standings after four games.

United have lost three straight games to Swansea and fell five points behind Manchester City, which have won all four of their games.

In yesterday's other match, Southampton claimed their first win of the season by beating Norwich 3-0, thanks to Graziano Pelle's goal and a double from Dusan Tadic. Norwich played with 10 men from the 31st minute, when Steven Whittaker was sent off for two bookings with the score at 0-0.

United caused Swansea many problems early in the first half, with Mata shooting wide twice, Rooney misjudging an attempted lob after being played through and Memphis Depay having a free-kick saved.

The opening goal arrived when left back Luke Shaw's cross squirmed through to the back post where Mata beat Ashley Williams to the ball and side-footed a rising shot high into the net. It is only United's third goal in four games.

Swansea manager Garry Monk changed his team's shape, went to a diamond in midfield and Ayew inspired the fightback.

First he met Gylfi Sigurdsson's cross with a downward header inside the near post in the 61st, then supplied Gomis with a brilliant outside-of-the-foot pass. The striker got between United's two centre backs and rolled his finish underneath Romero, who had barely been tested in the opening three games of the season.

"Today, we lost the game in five minutes," Mata said.

United kicked off just as City announced the signing of goalscoring midfielder Kevin de Bruyne from Wolfsburg for a fee that reportedly could cost the league leaders £58 million ($89 million).