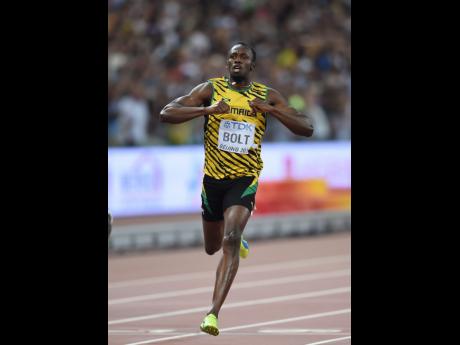 Twelve medals, inclusive of seven gold, two silver, and three bronze, saw Jamaica finish in an impressive second on the table at the 15th IAAF World Championships in Beijing, China.

It is fair to say the dream run continues for Jamaica in international track and field.

There has been one constant in recent years of Jamaican excellence in the sport in the form of Usain St Leo Bolt, the inspirational leader and standout performer whose influence directly and indirectly cannot be overstated during this period of pound-for-pound dominance by Jamaica.

Bolt was at it again in Beijing, winning his now customary three gold to take his total to 11 World Championships gold medals.

Amid the euphoria of celebrating the success of the Jamaican ambassadors, there is the clear and present danger, I think, of taking the 'Bolt Effect' on Jamaica's on-the-track fortunes for granted.

Bolt invariably leads from the front, with the stellar 10-metre event run off early in all the major championships, giving Bolt the perfect platform to set the platform.

In Beijing, for example, there was additional pressure on Bolt to deliver, and the superstar delivered emphatically by destroying the myth of a Justin Gatlin challenge in that first big race of the championships. It is a victory that with all things considered, must have inspired every member of that Jamaica team to even greater excellence.

I remember watching a video clip of members on the Jamaican team in a hotel room in the athletes' village watching that 100m final, obviously shot with a cellular phone, with running commentary by some of the athletes. You could hear the near reverence with which the big man is held within the team coming out in the comments.

When the big man, Bolt, beat Gatlin at the line to win gold, the phone was still running and it captured the ensuing pandemonium with the loud, jubilant, and colourful cheers by the Jamaicans, who stormed out of the room and into the hallways. The big man had delivered and Jamaica was the best.

The bar was now officially set in the biggest event of them all. Confidence must have swept through the Jamaica team like wildfire as the proverbial domino effect followed.

The Jamaican governing body, Jamaica Athletics Administrative Association, must recognise and address the inevitable fall-off that will occur when the 'Bolt Effect' expires. The soundings are that Bolt could walk away from the sport in another two years. The void that will result from that eventuality obviously cannot be filled, but things need to be put into place to minimise the fallout from that imminent Bolt exit.

We all need to understand and appreciate the fact that we are all living in the time of the greatest athlete to have ever walked the face of the Earth and that if and when he goes, the sport will not be the same, and Jamaica's status will not be the same. It is going to take some major adjustments locally and internationally to appreciate life in track and field after Bolt.

By all means, we must continue to enjoy the spectacular brilliance and genius of Bolt, but we need also to understand clearly that it cannot and will not last forever, and that sooner, rather than later, Jamaica especially, will have the arduous task of continuing our quest for excellence in the sport of track and field without the 'Bolt Effect'.