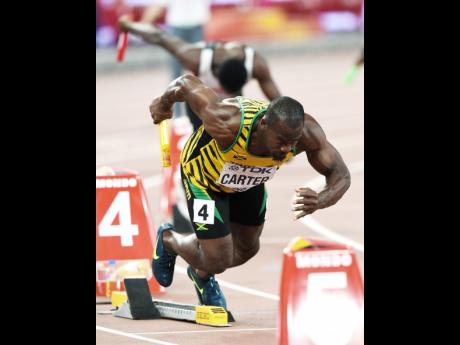 Ricardo Makyn
Nesta Carter leaves his block like a speeding bullet to set the stage for victory in the men’s 4x100m final.

Foster's Fairplay is asking track and field's local governing body, the Jamaica Athletics Administrative Association (JAAA), to answer a simple question: Why do you continue to provide lethal ammunition for Stephen Francis, the traditionally bellicose coach, to pierce your armour, revealing an underbelly of incompetence?

This Nesta Carter omission from the Beijing World Championships is a case in point. It could assist, given the frequency of these missteps, in 'organising your way out of a garbage can'.

Who needs a regime that does not have the interest of its athletes as top priority?

Francis makes the point that year-to-year, schools continue to have difficulty in completing the required forms to access Boys and Girls' Champs. This has led to some of the athletes being ruled out of competing in the stellar event in the particular year. This sanction is even meted out to prominent teams, which are found wanting.

Who, with this in mind, can fault the MVP Track Club boss for suggesting that these errant schools could be following bad practices in which their association is engaged?

Against that enlightened background, it is instructive to examine the Carter situation.

Sprinting legend-plus, Usain Bolt, as defending champion, had unfettered access to the men's 100m event in Beijing. The end-of-June trials thrust forth Asafa Powell, Nickel Ashmeade, and Kemar-Bailey-Cole, who took 1-2-3 at the deciding event.

Carter was fourth, and in case of a withdrawal by any of the top three, would be given the empty lane.

This, however, pre-supposes that he was included on the entry form as an alternate. He was not. As such, when Bailey-Cole got hurt and had to forfeit the championships, under strictly enforced IAAF rules, no replacement could be allowed. Thus, the JAAA, or their nominee, who compiles the entries, are clearly at fault.

What followed were frantic, and in the end fruitless attempts by the JAAA general secretary, Garth Gayle, to have Carter offered a side-door access to where their embarrassingly egregious error had placed the team.

What made it even more painful is that the MVP sprinter, the defending bronze medallist, was denied a second chance to repeat by the ineptitude of those who should have had his welfare as paramount.

Francis had every legitimate right, and in fact, responsibility, to place the matter under the public microscope. However, he, too, has a role - a duty of care - which so far is being overlooked.

In protection of his charges, he has 'taken the sword' to the JAAA at the slightest perception of an unjust attitude - the type which tends to disrespect, demoralise, and deny them what is their right.

Simultaneous with this latest furore, he was 'nailing the oversight body to the cross' for a pre-Beijing training camp, not in his view, beneficial to his athletes.

LITTLE OR NO REGARD

There can be no stepping away from the fact that the coach has little or no regard for the body to exercise proper stewardship over the athletes.

Where, then, were the sounding of alarm bells in the lead-up to the putting together of the Beijing entry documents?

Did Francis' traditional belligerence and vigilance in protecting his charges against JAAA poison go on temporary vacation? Should he not have taken action, not foreign to him - 'kick down a few doors' - to ensure that all was well?

Come on, Stephen. History has shown that controversy and you sleep very well together. There was a dire need to engage a JAAA known by you to have 'square pegs meaninglessly driven into round holes'.

Questions should have been asked to halt the governing body in its tracks, should it be perpetrating, with or without malice or ill-will, any action or non-action, to deny an athlete, that to which there was an entitlement. In the circumstances, it is inexcusable for Carter not to have competed in the 100m in Beijing.

The JAAA and the MVP coach must share the blame and the resultant shame.

Carter has been denied a legitimate stage by the joint negligence of two frequently opposing parties.

They have taken responsibility for protecting his future. Did someone say something about 'restraint of trade'?

Foster's Fairplay is all ears.