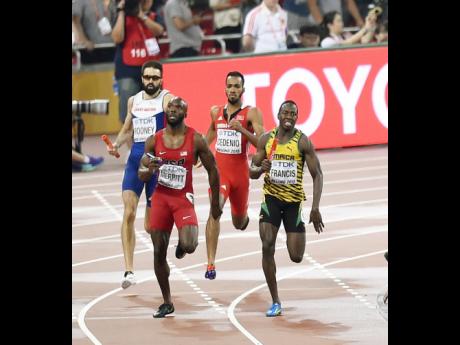 Ricardo Makyn
Javon Francis (right) grimaces as he heads towards the line with the United States' Lashawn Merritt (left), Trinidad and Tobago's Machel Cedenio (second right) and Great Britain and the Northern Islands' Martyn Rooney in the final of the men's 4x400m at the World Championships in Beijing, China. The USA won, T&T placed second, Great Britain third and Jamaica fourth.

As he did to rescue a silver medal in the same event two years ago, the 21-year-old national champion charged into the lead.

In the 2013 World Championships, his anchor was timed at 44 seconds flat. On Sunday, he was even faster at 43.5 seconds.

That matched the fastest hand-timed relay split ever, a 43.5 by renowned baton genius Davian Clarke, to finish a national record run of two minutes, 56.75 seconds in the 1997 World Championships.

In 1997, Michael McDonald, Greg Haughton, Danny McFarlane, and Clarke got the silver medal, as did Rusheen McDonald, Edino Steele, Omar Johnson, and Francis in 2013.

They combined for a time of two minutes, 58.51 seconds, the same as Great Britain, but with the photo-finish camera revealing the edge for the British anchorman, Martyn Rooney.

This was Francis' first relay sub-44 clocking. He joins Clarke, Haughton and Seymour Newman as Jamaicans to produce such times on the 4x400-metre relay. Newman was the first, with 43.8 in the 1976 Olympics. Clarke matched that in the heats of the 1995 World Championships.

The fastest 4x400m leg on record is the 42.9-second anchor by outstanding American Michael Johnson at the 1993 World Championship. That closed a world record run of two minutes, 54.29 seconds.