India poised for victory over Sri Lanka in deciding Test 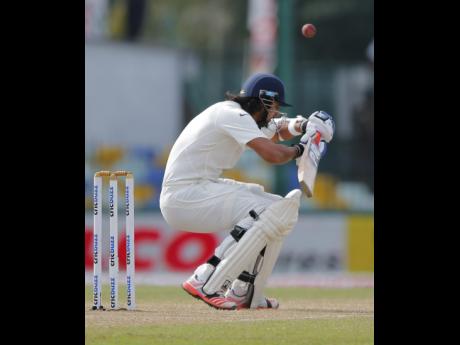 Seamers Ishant Sharma and Umesh Yadav propelled India to a winning position in the decisive third Test as Sri Lanka, chasing a daunting 386 to win, were struggling on 67 for three at stumps on day four yesterday.

Sharma removed opener Upul Tharanga for a duck, with just one run on the board, caught behind by Naman Ojha. Yadav had Dimuth Karunaratne caught behind, also without scoring, leaving Sri Lanka 2-2. Dinesh Chandimal made 18 before being caught in the slip by Indian captain Virat Kohli off Sharma with the total on 21.

Rohit Sharma, whose half century and two crucial partnerships saved India from the losing advantage in the second innings, is confident they can finish the job, just as they did in the second Test at P. Sara Oval, where India defeated Sri Lanka by 278 runs, with Sri Lanka chasing 413 to win.

"We stand in a good position right now," he said. "Giving them a target on a wicket like this, which has something for the bowler throughout the day, whether it is spinner or fast bowler.

"I guess we will just have to come out tomorrow and do what we did in P. Sara."

Indian bowlers relentlessly attacked the Sri Lankan batsmen, who were beaten outside the off stump several times or edged deliveries short of the fielders.

Earlier, India - batting with a first-innings lead of 111 runs - were bowled out for 274 in their second innings. The three-match series is level at 1-1.

India lost three wickets for 21 in their second innings but were rescued by Rohit, who scored 50 and shared 57 runs for the fourth wicket with captain Virat Kohli (21), and 54 with Stuart Binny, who fell one run short of a half-century.

No. 9, Ravichandran Ashwin, top-scored for India with 58 and shared 55 runs for the eighth wicket with Amit Mishra, who made 39.

Sri Lankan and Indian players were involved in a heated argument in the final over of the Indian innings. It started when Prasad directed a series of bouncers at tailender Sharma. During Sri Lanka's first innings, Prasad injured his hand trying to fend off a bouncer bowled by Sharma.