We are here to win - Nicaragua FA president 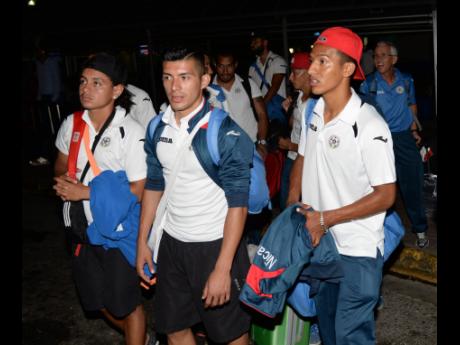 Jermaine Barnaby
Members of the Nicaragua men's senior football team as they arrived at the Norman Manley International Airport last night. They are here for a World Cup qualifying football match against Jamaica at the National Stadium on Friday.

Jose Jacinto Reyes, president of the Nicaraguan Football Federation (NFF), believes it will be youthful exuberance versus the experience and proven track record of Jamaica's national senior Reggae Boyz, when both teams meet in a crucial World Cup qualifier inside the National Stadium on Friday night.

Both teams will lock horns in a crucial qualifying match ahead of the 2018 FIFA World Cup in Russia. The game will begin at 8 p.m.

Reyes believes the Reggae Boyz are worthy favourites at home, given their wealth of international experience and recent form internationally.

"Nicaragua is a team that is coming from less to more (improving), so yes, we are ready for Jamaica," he told The Gleaner in an interview yesterday, as part of the Nicaraguan delegation that arrived at the Norman Manley International Airport in Kingston.

"Nicaragua team is a young team, and we don't have the same experience that Jamaica has, but we are prepared," he reiterated, while labelling Jamaica favourites.

Jamaica comes into this contest as the first Caribbean team to play in a Gold Cup Finals, and prior to that, they featured in the Copa America tournament hosted in Chile.

Meanwhile, Nicaragua are unbeaten in 2015. The teams they beat in round one and two of the 2018 FIFA World Cup qualifiers were Anguilla 8-0 on aggregate and Suriname 4-1.

He says should the match end in a tie, football would be the winner, while noting his association is under a new administration and its thrust is banking on youth.

The Reggae Boyz will travel to Nicaragua for the September 8 return leg. The winner on aggregate will advance in the 2018 qualification for Russia, while the loser will be eliminated.