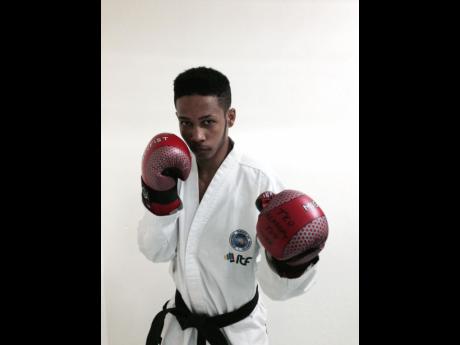 TREVOR 'Cassidy' Webb Jr departed the island yesterday, beaming with pride and bursting with anticipation after being called as a junior to Jamaica's combined martial arts team for Sunday's four-nation tournament in the Siberian town of Khanty-Mansiysk.

Webb Jr, 17, is a standout for Calabar High School in the McKay Security High School Jamaica Taekwondo Association League. He is the second junior to have ever been called to the combined team, emulating captain Nicholas Dusard.

"It was a big surprise for me," Webb Jr said on Monday. "I didn't know I could have reached so far. The training, preparing for Russia, it was a lot of training, trust me.

After twice beating Dusard in points sparring at local tournaments, six-footer Webb was drafted by former combined team captain, Jason McKay, for this weekend's international in Russia. The Jamaicans are down to face hosts Russia, Germany and Greece, fighting on invitation of the All Russian Taekwon-Do ITF Federation.

McKay said he is expecting Webb Jr, a second degree black belt, to be at his best in Russia with a bit of tweaking.

"His preparation has been going well. He comes as a talented fighter, well-trained. His particular style of fighting is more counter-attacking, we're working on his legs and getting him to be more attacking," McKay pointed out.

"It is the hardest training ever. I train and cry, literally. At times I feel like I can't move my legs after training. It's mostly the anaerobic side of training. You don't get to breathe so when you're in a fight you can go continuously for two minutes without stopping. That's the combined team training. It is very hard," Webb Jr explained.

"I am looking forward to win in Russia, so I can return and train for the ITF Pan-Am Games in Canada," he added.