Hubert Lawrence: a little at a time 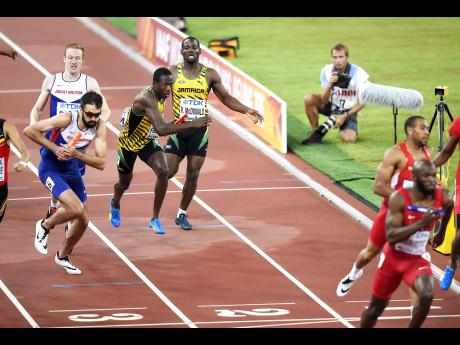 It is 1947. Running for the University of Illinois, young Herb McKenley is in hot pursuit of a fast rival in the 4x440 yards at the Penn Relays. He accelerates early and makes up ground, but the surge is premature. Herb fades and the chase is lost.

As related by Errol Townsend and the late Jimmy Carnegie in their classic book, Herb McKenley: Olympic Star, his coach, Leo Johnson, advises, "When you are behind, Herb, eat it up a little at a time."

Fast-forward to 1952 and the Olympic Games in Helsinki. In his last opportunity to get an Olympic gold medal, Herb is faced with a 15-metre gap on the third leg of the 4x400m final and Johnson's words come back to him as an assurance.

He spreads his speed across the entire journey this time and catches Olympic 400-metre hurdles champion, Charlie Moore, just before the exchange to 400 winner George Rhoden. The result is a sublime 44.6-second carry, history's first sub-45, gold for Jamaica and a world record.

It's 2013. Schoolboy Javon Francis bravely scoots past four other anchormen and holds off a resurgent Russian team in front of a boisterous Moscow crowd to hang on to the silver medal for Jamaica. Remarkably, Francis has run his leg in 44 seconds flat.

Last Sunday, in the last race of the 2015 World Championships, Francis was faced with a similar problem. The situation was even more acute. A win for Jamaica would secure the gold needed to top the medal table. With his teammates - as a group - running more slowly than the first three legs did in the heats, he chose the 2013 strategy and took off.

The result was a circuit timed in 43.5 seconds, equal to the fastest 4x400m leg ever by a Jamaican.

The brilliant effort left the team thousandths of a second short of the bronze. Recriminations began immediately, but Francis had given more than his all. He was a full half a second faster than in 2013.

Should he have taken the advice Herb used to good effect in 1952? Or were things somehow different?

So it seemed. Herb was chasing one man. On the other hand, Francis had World and Olympic champion Lashawn Merritt, World Junior champion Machel Cedenio, European champion Martyn Rooney, and Belgium's unheralded Arnaud Ghislan between him and victory. With three really fast runners to overcome, traffic might have been a problem in the closing stages.

Had he run 44.5, the recriminations might have more substance. A better-paced anchor leg might have collected the vital split-second difference between bronze and fourth, but the same can be said for each of the preceding legs. After all, the relay is a team event.

In the heats, the Jamaica team covered the first three legs in two minutes, 14.1 seconds. The corresponding figure for the final is two minutes, 15.0 seconds. In the end, Peter Matthews, Ricardo Chambers, Rusheen McDonald, and Francis had run two minutes, 58.51 seconds. No team has ever run that fast to finish fourth.

It's 2015, and if Herb were here, he'd probably hug the team. After that, with a wipe of a motivational tear from his eye, he's probably calling Francis over for a little chat.

It's a fair bet that that talk would be filled with stories of a glorious history and a little advice.