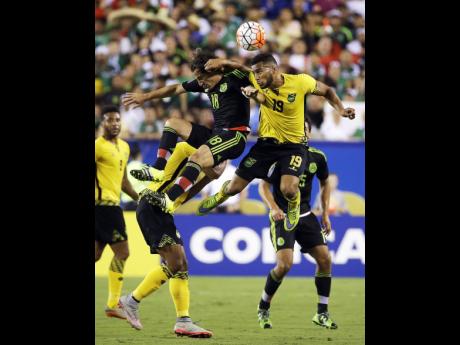 AP
Jamaica's Adrian Mariappa battles with Mexico’s Andrés Guardado (left) for the ball during the first half of the CONCACAF Gold Cup final in July.

The teams will clash in the first leg of their 2018 FIFA World Cup qualifiers.

"I can't wait. It's been a long time, so hopefully, a lot of fans will come out and support us, 'cause we've done well in the Gold Cup, so we are all eager to do well and we are all just gearing up for Friday," he reasoned.

Of Central American opponents Nicaragua, he expects a tough challenge, given that they arrive in Jamaica unbeaten this year. They outclassed Caribbean hopefuls Anguilla 8-0 and Suriname 4-1 on aggregate, respectively, in rounds one and two of qualifiers.

"We put a lot of pressure on ourselves to win games. We've always believed in ourselves, and going into the qualifiers, we know we are capable of making it to the World Cup. We'll just take it game by game, and we look to get through this round," he added. "We are very confident we can make it."

Patrons will have a special opportunity to support the Reggae Boyz in their return fixture next Tuesday against Nicaragua as a result of a charter organised by the Jamaica Football Federation (JFF).

The charter will leave Jamaica on Tuesday, September 8, at 1 p.m., arrive in Managua at 2 p.m., and depart to Jamaica on September 9 at 6 a.m.

The game will be played at the Estadio Nacional de F?tbol de Nicaragua, which has a capacity of 20,000, and match time is 7:30 p.m.

The cost per person is US$650, and this covers airfare, taxes, ground transportation, and match ticket.

Interested persons who want to cheer on the Reggae Boyz in Nicaragua can call the JFF offices at 926-1182 or email jamff@hotmail.com or jffroseb@hotmail.com immediately. Payments are due before departure.