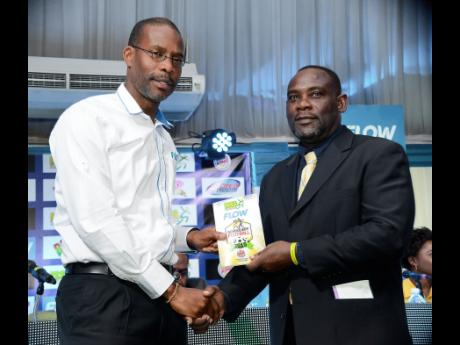 Ian Allen
Dr Walton Small (right) President of the Inter-secondary Schools Sports Association (ISSA) present a copy of the fixtures for the Manning and daCosta Cup competitions to Garry Sinclair, managing director of FLOW during the launch of the 2015 schoolboy football season at the Terra Nova All Suite Hotel in St Andrew yesterday. 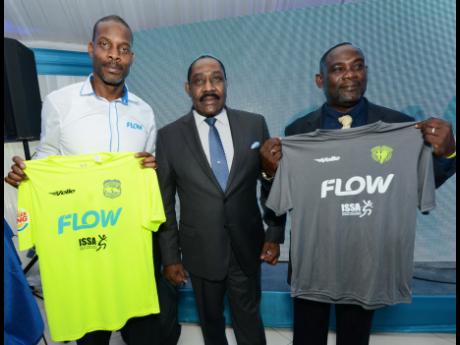 A new title, night games, and pool sponsors are just some of the new features that will be added to the 2015 Inter-secondary Schools Sports Association (ISSA)/FLOW schoolboy Manning and daCosta Cup competitions.

The competition is set to kick off on Saturday, September 12 with a triple-header at Catherine Hall Sports Complex in Montego Bay. Manning Cup champions Jamaica College will oppose Calabar High in the opener at 2 p.m. DaCosta Cup holders Clarendon College take on Edwin Allen in the second game at 4:45 p.m, before Irwin High face former winners Cornwall College in the final game at 6:45 p.m.

ISSA president, Dr Walton Small, admitted that there are concerns regarding night football for schoolboys but cautioned that this season was a trial and that they would review it at the end of the competition.

“We had the discussion and the pros and cons were looked at ... . For these games we expect everything to be finish by 8 p.m.

“If parents can’t accompany them, we expect them to put things in place to ensure they get back to their destinations.. At the end of the year it is something that we are going to evaluate to see if we should continue,” he told The Gleaner.

Another new addition is pool sponsors. Eleven schools will make a pool, which will include one seeded Manning Cup team and a seeded daCosta Cup team and nine others selected by each prospective sponsors. The logo for the pool sponsor will be branded on the back of the jerseys.

There are 10 pools available and Wisynco has already taken four pools, Locker room has taken one pool and Lasco another pool, while two companies are said to be in negotiations and their sponsorship will be announced by next week.

Each pool costs $2 million and the sponsorship will extend to the school’s junior teams (Under-14s and Under-16s) who will wear the sponsor’s logo at the front of their jerseys for their respective competitions.

The Manning Cup final is set for November 28 at the National Stadium and the daCosta Cup final scheduled for December 5 at the Catherine Hall Complex. The ISSA/FLOW Super Cup will take place between October 24 and November 14. There will only be one leg for the Oliver Shield this year and that takes place on December 12.