More to come from Morgan 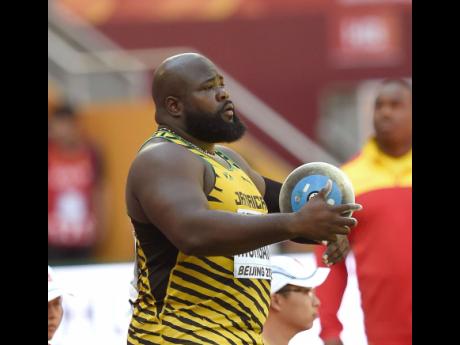 JASON MORGAN stepped up to the plate in Zurich but was unable to find the type of form that has seen him throw a personal best and national record of 68.19 metres.

Morgan finished in eighth position in the Diamond League discus event with a best throw of 58.52m.

Reflecting on his form this year, he told The Gleaner that hurting his back earlier in the season hindered his progress.

He said: "This year has been ups and downs. The ups were breaking the national record, the downs was hurting my back really bad.

"I continued to throw because I had scheduled meetings, but that wasn't the best thing I could have done."

He added: "Next year is another challenge, I'm looking forward to it but, hopefully, I will be able to secure some finance that will help me. I'm coaching myself and work a full-time job caring for abandoned and abused kids; it's not an ideal situation.

"Today's competition wasn't the best, but it's another day. It started raining earlier and I've had a bad experience in the rain when I slipped in London, so it made me wary."

Morgan said competing in the World Championships in Beijing has steeled him for the rigours of international competition. Approaching the Olympics in 2016, he will be ready to improve on his performances this year.

He said: "I'm actually motivated by what I could have done this year at the Championships if I wasn't hurt. You are not going to get everything you want all of time but I am a positive man, and I am looking forward to next year."