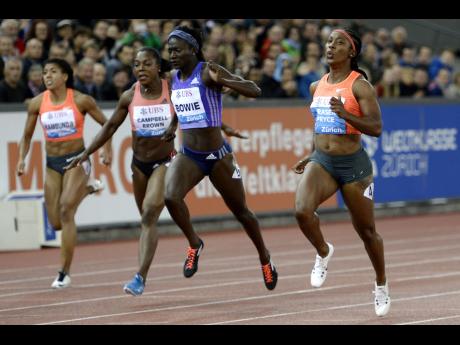 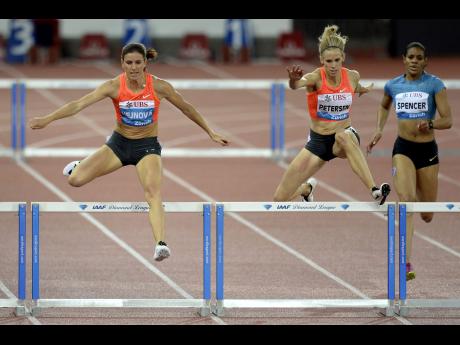 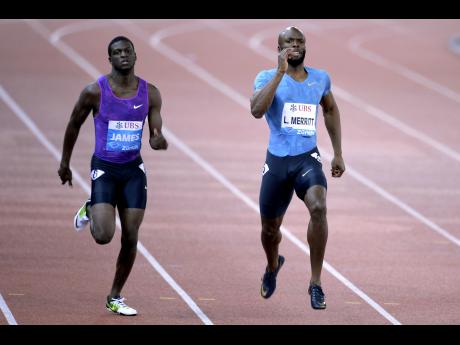 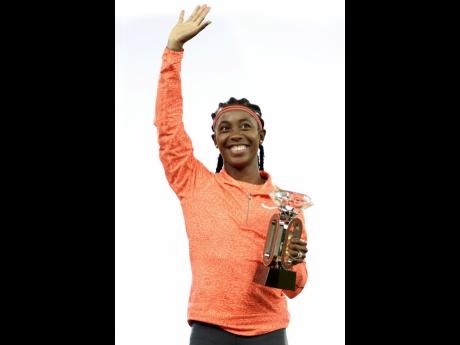 AP
Jamaica’s sprinter Shelly-Ann Fraser-Pryce poses with her 100-metre Diamond race trophy during the Diamond ceremony at the end of the Diamond League athletics meet in Zurich, yesterday.
1
2
3
4

AS EXPECTED it was a rapturous reception for the three-time World 100-metre champion Shelly-Ann Fraser-Pryce in Zurich as the sprinter took the winner's spot on a chilly night in Switzerland.

The diminutive sprinter led from gun to tape and never looked in danger of losing.

Smiling as always, the 28-year-old told The Gleaner it was nice to compete but found it difficult to get herself in the zone which may have seen her register a personal best.

"I just wanted to come out here and put a race together, it's always the hardest race of the year after a major championships. To be honest, I wasn't in a similar zone to where I was in the World Championships. I was still focused when I got to the warm-up area, and focused on what I had to do, but it was different."

She added: "There is no more to ask for; I won the World Championships and the Diamond race. I am glad I finished first here. Each time I come here, I want to do my best.

"I have one more race to go on Sunday, unless my coach changes things."

Veronica Campbell-Brown and Natasha Morrison finished sixth and seventh, respectively. Campbell-Brown told The Gleaner that she wasn't going to give herself a hard time without reviewing the race, but was understandably underwhelmed by her placing sixth and at a time of 11.22.

She said: "My season started rough, but it turned around and wasn't too bad. I am grateful. I have a couple of years left, I'll see what happens and what God has in store. Taking it season by season."

Jason Morgan, national record holder in the discus, struggling with injury and a lack of financial support, demonstrated why the country is getting excited by the possibilities of what could be in Rio de Janeiro at the Olympic Games next year.

Morgan's season came off the rails when he was injured prior to the World Championships in Beijing where the big man finished 22nd.

Slippery conditions in Zurich meant he was unable to get near his season's best throw of 68.19m. But having set the bar high this year, all bodes well for 2016.

Another athlete who has surprised a few is Rasheed Dwyer. His 200m second placing confirmed, along with the likes of Elaine Thompson, that Jamaican sprinting has depth and is always progressing.

The bittersweet feeling of having run so fast in Beijing yet finishing second behind Dafne Schippers will no doubt add fuel to the fire for Thompson. A training partner of Fraser-Pryce, the standard of the deuce is about to go through the roof and the 23-year-old is widely tipped to be the person to take it there.

Her 11.06 win in Switzerland was a world away from her personal best time of 10.84 which she set earlier this season. But her strength is omnipresent and she will no doubt be one of the women to beat come next season.

If there was a performance which warranted cause for concern, it would have been Veronica Campbell-Brown, who finished sixth in the 100m.

The seasoned campaigner that she is, Campbell-Brown refused to read too much into her race, preferring instead to go away and assess once the emotion of the day had dissipated. She's far from finished, but one gets the sense that things are getting harder with each season.

One man who knew he hadn't performed but still left the track on a positive note was Nickel Ashmeade.

His 20.35 fourth-place finish in the 200m was far from a let-down, but the stalwart has been suffering with injury all season and hadn't managed to find form when it mattered most.