Scotiabank presents Kiddy Cricketer with US$500 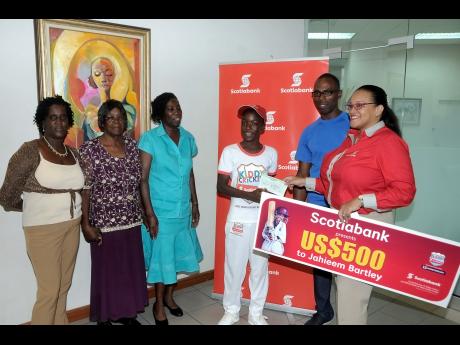 Contributed
Hope McMillan-Canaan (right), public and corporate affairs manager, Scotiabank, presents outstanding Kiddy Cricketer, Jahieem Bartley, with a US$500 cheque for being selected as top performer for Jamaica in the Scotiabank/WICB Kiddy Cricket programme. Jahieem is one of 15 young cricketers who will be selected across the region to receive this outstanding performance grant for excellence on the field of play and academically. Looking on from left are Donna Windith of Broadleaf Primary, Marvis Bartley, Jahieem’s grandmother, Sephlyn Graham and Keron Smith, principal and assistant coach at Broadleaf Primary, respectively.

According to Jahieem Bartley, he wants to purchase a pair of cricket boots.

Bartley, who received the grant from Scotiabank based on his outstanding performance in the 2015 Scotiabank/WICB Kiddy Cricket Programme, is an avid lover of the sport. He is one of 15 young cricketers to be awarded across the region.

The 2015 Outstanding Performance Grant is part of the 15th anniversary celebrations of the Kiddy Cricket Programme that identifies one Kiddy Cricketer in each WICB member territory, who has excelled both on the field of play and academically, rewarding him or her for their all-round annual performance.

Coming out of the cricket programme at Broadleaf Primary in Manchester, Jahieem, who captained the team, stood out with his propensity for bowling and his ability to perform in all areas on the field.

He says his coach saw his abilities and invited him to join the Kiddy Cricket Programme at the school.

"It was lots of fun," he stated when describing the experience. "I learnt a lot."

He now moves on from Broadleaf to take up the next phase of his academic journey, when he begins the secondary school programme at Manchester High next Monday. Of course, he is looking forward to pursuing his dream of playing for the West Indies cricket team.

"He was one of the most talent youngsters in the entire competition," Graham stated. "He has the love for the sport, is very bright academically and is a well-behaved, disciplined youngster."

According to Kiddy Cricket's national coordinator, Philip Service, "In addition to displaying excellent all-round cricket performances Jahieem had an outstanding academic performance at his primary school.

"Based on his skill set, he should be a contender, almost immediately, to represent Jamaica at Under-15," Service observed.

The Scotiabank-sponsored West Indies Cricket Board (WICB) Kiddy Cricket Programme aims to give primary school children an appreciation for the game. Conceptualised in 2000, Scotiabank has partnered with the WICB in islands across the Caribbean to offer a developmental programme that inspires interest in the game in youth and has, over the period, influenced thousands of children across the region.

The programme targets boys and girls, aged seven to 12, teaching them how to play the game and fosters learning and the building of leadership skills. The development of motor skills, art and craft abilities and even mathematics, encourage Kiddy Cricketers to become more disciplined and confident.

Scotiabank has also provided training material to thousands of children and distributed teaching manuals and Kiddy Cricket kits to hundreds of schools.

Several graduates of the programme have gone on to participate professionally in clubs across the Caribbean some of whom include Barbadians Kemar Roach and Kraigg Brathwaite, Trinidadian Darren Bravo and Jamaica's own Jermaine Blackwood.