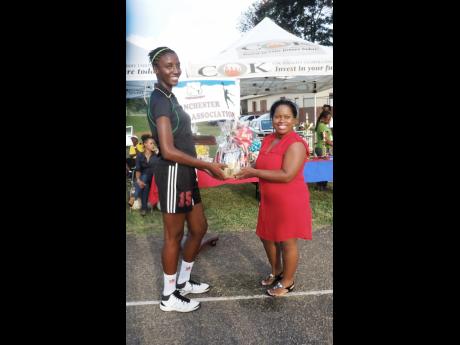 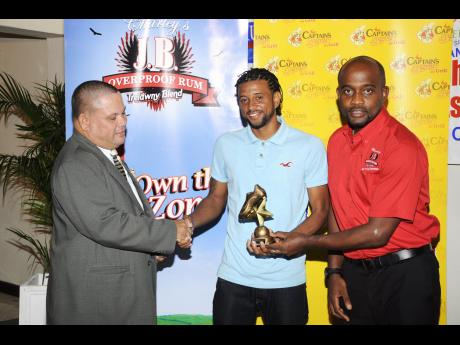 
The second annual George Lee Memorial 5.8 km Run/Walk road race will be on Sunday, September 27, starting at the Portmore HEART College of Construction Services in Portsmouth, St Catherine. Warm-up is at 6:15 a.m., while the race will begin at 6: 30 a.m.
"Let us be out in our thousands to help in raising funds for our children's scholarship/grant fund and our senior citizens recreational centre," said Aneita Lee, chairperson for the George Lee Foundation and widow of the late former Mayor, George.
Contributions are as follows: $1000 per individual entry and $800 per one for a group of 10.
Mrs. Lee pointed out that her late husband was instrumental in Portmore becoming a municipality. He was the first directly elected Mayor of Portmore and also the only man to serve as twice in that capacity.
Dover Lawrence, who represented Sun City Radio and Dana Thomas of Bridgeport High School were last year's male and female winners, respectively.

Passagefort United jumped to 20 points and stayed perfect as they won their fifth match in a row after defeating Ken's Wildflower 250-245 in the South East St Catherine Constituency Domino League, which is sponsored by Member of Parliament, Colin Fagan. The match was played last Sunday.
Passagefort remained atop the standings and lead Waterford United and Cumberland, which have 14 points apiece. In fourth place are Garveymeade (13 points, followed by Ken's Wildflower (10), Westmeade (10 points) and Portsmouth (two).
Waterford won their fourth game as they crushed Portsmouth 250-187 and Cumberland beat Westmeade Rising Sun 250-222.
The league continues this Sunday. Games on: Westmeade Rising Stars vs Ken's Wildflower at Garveymeade Sports Club, Passagefort United vs Cumberland at Myrtle Way and Garveymeade vs Portsmouth at Portsmouth Community Centre.

The 2015 season of the Jamalco Football League will come to a close tomorrow, with the final between Napoli and Top Hill at the Wembley Excellence Centre. Game time is 4 p.m., with a formal ceremony for the presentation of prizes to follow.
The semi-final matches were completed last weekend. Napoli continued their dream run when they derailed Railroad 4-0 to advance to the final. The goalscorers were Ronaldo Thomas (13th, 73rd), Michael Shim-Hue (42nd) and Raheem Brown (77th).
In a closely contested match, Top Hill edged Sunset 1-0 to book their spot. Sunset’s custodian, Lafane Hayles, was again brilliant as he saved two penalties in the 54th and 75th minutes. Top Hill were reduced to 10 players in the 72nd minute, when Tafforie Thompson received a second caution.
Both teams went on the hunt to break the deadlock and when it seemed as if the game would be decided by the dreaded penalty shootout, Oshane “Twinkle” McKenzie scored the all-important goal.
A total of 116 goals have been scored at an average of 3.05 goals per game. Savannah’s Huggart “Sweetie” Nugent with seven goals seems set to win the Golden Boot Award.

Genocide are the new champions of Manchester netball after easing past the youthful Chester Divas 22-11 at Manchester High School last weekend.
The game stayed tight until the second half, when Genocide went on a shooting spree. It was 8-6 at the half-time mark of 15 minutes. However, Genocide scored eight unanswered goals in the opening minutes of the second half to leave the score at an unassailable 16-6.
Defending champions Legendary were knocked out at the semi-finals by Genocide. However, Legendary were brutal against Royal Flat in the third place play-off, winning 26-9. All 26 goals were netted by goalshooter Sasha Mitchell.

Both semi-finals of the junior and senior netball leagues sponsored by Central Manchester Member of Parliament, Peter Bunting, will be hosted tomorrow at Manchester High School.
In the Junior division, Comfort, which won all three of their preliminary round matches, take on Albion, the runners-up from Zone Two, at 2:45 p.m. At 3:30 p.m., Zone Two winners Newleigh All Stars, who are also unbeaten, will fight it out against Broadleaf.
The senior games begin at 4:15 p.m., with Bombay against Woodlawn Phoenix. The other semi-final, at 5 p.m., sees Mandeville All Stars against Williamsfield.
The competition will end next Saturday, September 12, featuring a closing rally of all the teams which failed to reach the semi-finals.

Manchester to lobby for NPL franchise

Manchester will lobby for a franchise when the Jamaica Football Federation (JFF) releases its new franchise system that takes over from the current organisation of the National Premier League.
This ambition was mooted by current President of the Manchester Football Association, Dalton Wint, at the association's annual football awards ceremony. According to Wint, the parish was unlikely to gain qualification by any other system because of how difficult it was to sustain proper club financing at the Major League level.
"Successive administrations have made it their goal to qualify for the Premier League, but the truth is our clubs would have found it difficult to survive," Wint said.
He said he was prepared to use his association to influence the JFF to offer a franchise to a Manchester consortium that could include interests from neighbouring parishes.