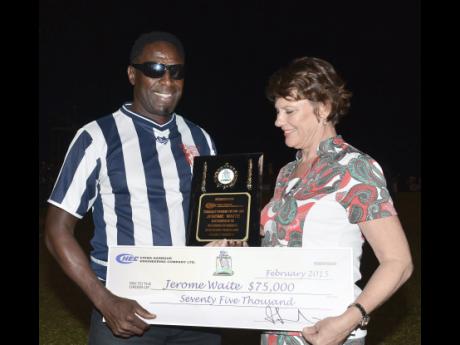 From all indications, defending champions Arnett Gardens will not start the season at full strength.

According to head coach Jerome Waite, the Business House competition has kept his players occupied up until the start of the season, while others are still overseas.

However, the three-time Premier League-winning coach has placed his trust in the experienced players he has available, as well as young players coming into the squad.

"Arnett Gardens will start slow this season," he told The Gleaner. "Reason being, a lot of players participate in the Business House competition and they have not shown up for regular training, as well as players overseas. But despite that, we are looking forward to the season, as it's not how we start, but how we finish," he said.

"I am not worried about the core of the team at this time," he continued. "The youngsters here will be given the opportunity, all they need to do is go out and perform to the best of their ability and put the pressure on the other players that are not here (yet)."

He admitted that the young players will go through a learning curve before they can establish themselves.

"They (young players) will be going through a learning process, but the fact that we have a system in place means that players have to understand the roles and functions of the system, so it will be a learning process for a lot of those youngsters," he pointed out.

"The team will always be prepared physically, mentally, tactically, technically and psychologically and all of those things when we put them together will ensure Arnett Gardens have another successful season," he continued.

Even though some key players from last season's triumph will miss the start of this campaign, Waite intends to start with a win against University of the West Indies FC to Monday.

"Although the core of the team is not there I expect them to handle themselves well. Our last 13 games up to the final we won and we want to continue that unbeaten run.

"As the defending champions, you have to take your opportunity at the start of the season, not in middle or the end. In the first round, you have to go out and start as champions," he insisted.