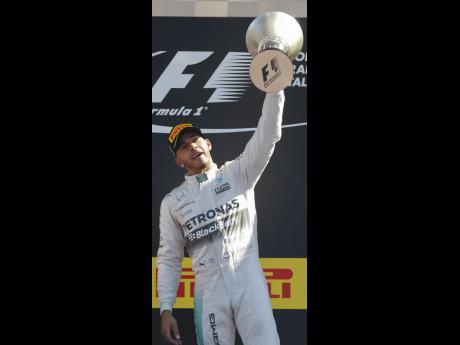 AP
Mercedes driver Lewis Hamilton of Britain holds up the trophy as he celebrates on the podium after winning the Formula One Italian Grand Prix at the Monza racetrack, Italy, yesterday.

Lewis Hamilton dominated Monza yesterday to win the Italian Grand Prix, but was forced to endure a stewards' enquiry into the tyre pressure of his Mercedes, before he could celebrate his second straight win at the historic venue.

Starting on pole, Hamilton drove superbly to clock one hour, 18 minutes and finish 25 seconds clear of the second-placed Sebastien Vettel of Ferrari.

"This weekend has been just fantastic. It has been a perfect weekend for me. I don't know if I have ever had a weekend like this. This circuit is such a special one ... . I think it's the same for all the drivers," said Hamilton, whose paternal grandparents hail from Grenada.

"When you stand on top of that podium, you feel incredible pride and incredibly proud to be amongst the greats that have stood up there, and when you see a sea of fans - a lot of them in red - but the sea of fans is just unlike anything I've seen. It's very emotional when you are up there."

Hamilton had a dream start in getting away well, and after Kimi Raikkonen, who qualified second, lagged on the grid, the reigning world champion built a lead of nearly two seconds after the first lap.

He was 12 seconds clear of Vettel after 20 laps, an advantage that left the result in little doubt.

"I got a good start. I think we all probably got a difficult start and managed to hold ground," Hamilton explained.