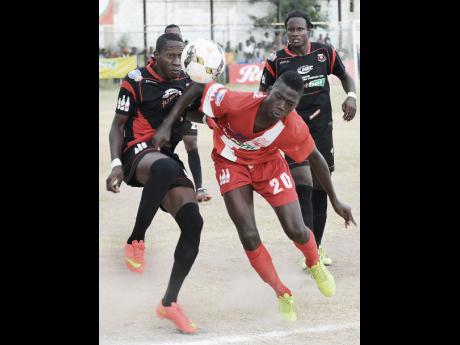 "You have to expect things of yourself before you can do them," is a quote attributed to basketball legend Michael Jordan and one which last season's young Player of the Year seems to be guided by.

Eighteen-year-old Shamar Nicholson, who scored seven goals in 20 games and was named the Red Stripe Premier League (RSPL) Young Player of the Season, has set himself the lofty target of being the top scorer this season and reaching a mark of 20 goals. This despite the fact that he will enter the League at a later date than most of the others he will be competing against.

"Last season was a great experience for me. It gave me the confidence that I can compete at this level and I am looking to doing even better this season by being the top scorer with at least 20 goals," said the Boys' Town youngster, who will not enter the league until the Manning Cup ends in early December.

The confident youngster, who scored on his RSPL debut last season against Humble Lion in a win for his struggling club, is not just one with his head in the clouds. He recognises that he has a lot of work to do.

"When I look at last year, I know I scored seven goals and scored against teams like Rivoli, Tivoli, Harbour View and Cavalier, but there is more I can do. I need to improve on my finishing, to be more calm in front of goal and I am working on it. I want to be more like my hero, Zlatan Ibrahimovic, who always finds a way to score. It could be off his shin, his chest or whatever. It is not always fancy, but he scores.

"I expect to show what I have learnt in the Manning Cup this season as I will now be playing for Charlie Smith, with Trench Town and Charlie Smith merging," explained the six-footer.

Nicholson sees himself as a future Reggae Boy and said that an impressive performance in the League could earn him a call up to at least a national age group team.

"In January, I was a part of Jamaica's Under-20 World Cup qualifying squad, but I only played one match as a substitute. The truth is that I was kind of nervous as it was my first time at that level. At 18, I am more mature and the next chance that comes I will be ready for it. I am hungrier now and I want more," he declared.