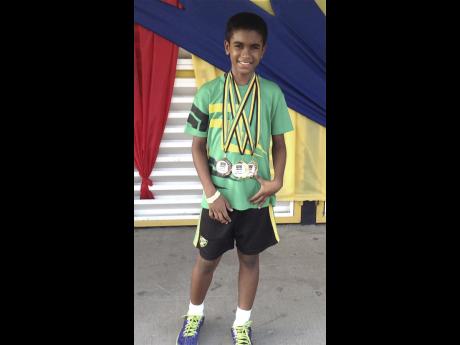 Contributed
Zane Reid poses with medals won at the 2015 Carebaco Tournament in the Dominican Republic.

He was the only Jamaican who made it to the finals in both events that he entered.

In his first match, Reid easily defended his Under-13 singles title by dismissing Zion St Rose of Trinidad and Tobago in straight sets, winning 21-10, 21-17.

Later in the day, he partnered with Tijae Hinds to defend his Under-13 doubles title against the Dominican Republic's Yan Franco Pena and Kael Sosa. Pena and Sosa took the first game with a close score of 24-22. However, undaunted by the challenge, Reid and Hinds fought back and managed to secure a second gold by winning the second and third games 21-18, 23-21, respectively, in the championship deciders on Sunday, August 30.

This was Reid's fourth year representing Jamaica at the CAEBACO Championships, and he has been successful for the last three years, defending his title as the number-one player in his age group. This was Hinds' first time representing his country overseas.