‘Teddy’ looking to give Tivoli Gardens a lift 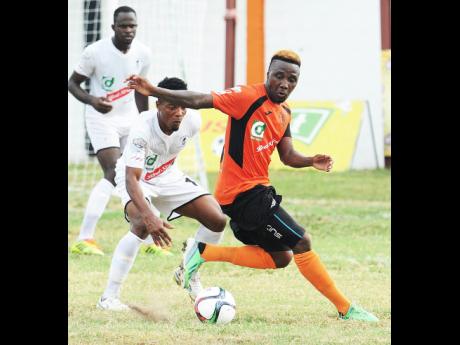 However, it wasn't the sublime performance the home fans and many football observers had anticipated.

The former Bolton Wanderers and Sheffield Wednesday striker, who is presently out of contract, told The Gleaner that although his intention is to return overseas, he wants to help the West Kingston club win trophies again.

He insists, though, that he is not a one-man band and needs the support of his teammates to be successful.

"Every time you play, you want to win a trophy or the competition, and that is my aim, try to help the team (Tivoli Gardens) win a trophy," he said.

"I can't believe that I am the one (to lead Tivoli back to the top), because we are a team, and we have to work as a team for everything to come together, so we have to believe in ourselves and try to go out and do it every game," he continued.

Johnson last played for Indy Eleven in the North American Soccer League (NASL). But he injured his shoulder - which required an operation - last October and has not played since.

The 35-year-old is confident that as long as his fitness continues to improve, he will get better.

"We never really got into the game today (Sunday), but it's the first game (of the season). We just have to come the next game and try to do our best, and just keep the focus and keep the confidence going, and once I get fit, everything is possible," he said.

The tricky playmaker still has his sights set on a national recall.

"I haven't played any competitive football since October, since I did surgery, so I just came down here to try and get fit and see what is possible for me in the longer run.

"All the time you are looking to go overseas to play football, but right now I am just concentrating on Tivoli, the players and the fans, and trying to get a trophy for the team," he said.

The striker was taken out of the game with under 10 minutes remaining after aggravating his shoulder from a first-half tackle.

Tivoli's coach, Christopher Bender, said it was unfortunate he had to pull the striker as he brings more than just talent to the team, and he has no doubt the former Oldham Athletic man will soon discover his magical touch.

"Teddy brings experience and talent. He is a very dedicated person, and now he is different as he is more mature," Bender commented.

"He also helps the training in how we imparts knowledge to the youngsters, so he is very valuable to the team. But the next game he will be better," he assured.