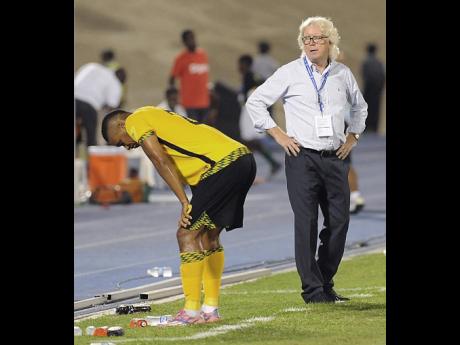 I must admit to being quite discombobulated and confused as I try to begin the analysis of the Reggae Boyz shock defeat at home to lowly Nicaragua in the first game of the 2018 World Cup qualification.

There were simply so many things that went wrong for Jamaica heading into and during that game, beginning with the fundamental error that took place well before last Friday night's game.

The decision by the JFF and or the coaching staff not to have played a single game at our home venue for more than two years is as brainless and as naive a decision as anyone could have taken, considering that home advantage is so vital in football generally, but especially in World Cup qualifying.

The psychological and physical advantage of playing at home were basically surrendered by that foolhardy decision.

Tactically, head coach Winfried Schafer and company must have been stone drunk from the recent Gold Cup performances to have entered the game with such arrogance and naivety. The fact that this is a home-and-away tie against a team that they knew very little about, and with so much at stake, means that the priority must have been to keep your defensive shape, for as long as it would have taken, to assess the Nicaraguans, instead of darting up the field, and like some immature schoolboys, totally losing their shape and discipline.

To go three-nil down at home in a World Cup qualifier to a team ranked 80-odd places below us on the FIFA rankings is inexcusable and under normal circumstances would be a dismissible offence by any coach in any self-respecting football jurisdiction.

The actual set-up of the team by Schafer and his staff was simply befuddling. The hype surrounding young defender Michael Hector's recent signing by English Premier League champions Chelsea must have further intoxicated the Jamaican coaching staff. The fact is that this columnist and many other astute football observers have seen that Hector is an awkward liability in the defensive third whenever the ball is at his feet. His first, second, third, fourth, and fifth touches are equally atrocious.

Despite the Chelsea buy and the reasons behind it, almost everyone except the Jamaican coaching staff has seen that Hector is an accident waiting to happen, the more he is asked to control, dribble, and pass the football. Yet Schafer and company put him to play as basically the last defender, doing most of the ball handling in that delicate defensive area, easily one of the daftest tactical decisions ever seen at this level of football.

Not only is Adrian Marriappa a senior pro compared to Hector, but the Crystal Palace man is much more comfortable with the ball at his feet, while Hector's strengths are tacking higher up the park, reading and intercepting passes, and winning headers. That logical switch of positions between the two never took place in the entire 90 minutes.

I found it very instructive that Schafer hardly moved from his seat on the bench during the game. He was definitely not the Schafer we saw at the Gold Cup, who was so consumed with passion and intensity. On Friday night, with the Jamaica team staring smack down the barrel of a World Cup embarrassment, Schafer remained slumped in his seat for most of the game, with his assistant, Miguel Coley, being the one expressing the requisite concerns.

Based on all we saw in that first-leg game against Nicaragua, an embarrassing first-round exit is certainly on the cards. Jamaica will need to win by two clear goals in Managua tonight to avoid that pending disaster.

Most certainly, but it is imperative that the Boyz and especially coach Winfried Schafer be fully awakened from their drunken stupor.