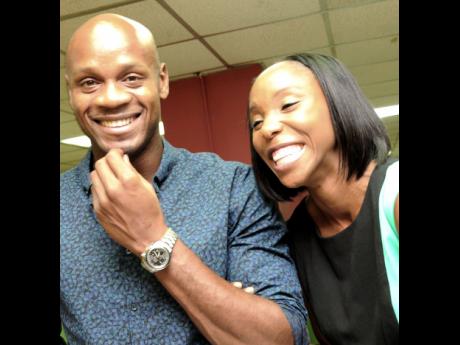 After being blacklisted by various sponsors and athletics meeting organi-sers for the better part of two years, Paul Doyle, the agent of World Championships medallists Asafa Powell and Sherone Simpson, is hoping the pair can revive their reputations after having reached an out-of-court settlement with a company that sold them tainted supplements.

"I just think the out-of-court settlement ... gives them some justification and clearance for their names," Doyle, speaking to The Gleaner from Ireland, said yesterday.

A release from representatives of the former 100m world record holder, Powell, and Olympic and World Championships silver medallist Simpson, yesterday said the pair had reached a deal with Dynamic Life Nutrition (DLN) LLC, the company that sold the supplement Epiphany D1.

The duo took the Epiphany D1 as part of their training regimen, but later found out it contained the stimulant oxilofrine.

The pair tested positive for the banned substance at the 2013 Jamaica Athletic Administrative Association National Senior Championships and were suspended. They were unable to compete at the World Champion-ships in Moscow as a result.

Powell and Simpson sued DLN earlier this year and Doyle said that it was a step towards clearing the athletes' reputations.

"Unfortunately, the damage to their reputations can never be undone, but at least this will prove to some people that it was ... negligence on the part of the supplement company.

"There are still meets that aren't inviting them and still some sponsors that aren't sponsoring them, but hopefully with this news, that will all change," he added.

Powell himself alluded to the damage in yesterday's statement.

"There is no way to really explain the kind of damage a ban has on an athlete's reputation. For us, it was especially painful, because we really let down our countrymen. There's no doubt that we're going to continue fight to repair it and regain the trust of my fans and fans of the sport," Powell said.

Simpson was also quoted as being happy for the result.

"The legal process is tedious, but we don't think about it when we are on the track. We have a very capable team and both of us are now extra careful about our diets and supplement regimen," she was quoted as saying.

Doyle said the settlement had been made prior to last month's IAAF World Championships in Beijing, China.

"It's been a while ... before the World Championships, but we didn't want to distract the athletes with this," he added.

Both Powell and Simpson were racing at an athletics meeting in Zagreb, Croatia, yesterday, following which they will head to Brussels, Belgium, to compete in the IAAF Diamond League final on Friday.

Doyle said the positive tests and the subsequent suspensions and damage to their reputation have "been the hardest thing they've ever had to deal with in their lifetime".

He added that the pair would now look to finish up the season with good performances and look forward to next year's Olympic Games in Rio de Janeiro.

The release added that Powell and his management team had Epiphany D1 tested by three independent labs, including the World Anti-Doping Administration and the US Federal Anti-Doping Agency (USADA).

The supplement was subsequently listed on the USADA's high-risk supplement list, while DLN has also stopped selling the product.