Boyz were certain of goal - Mattocks 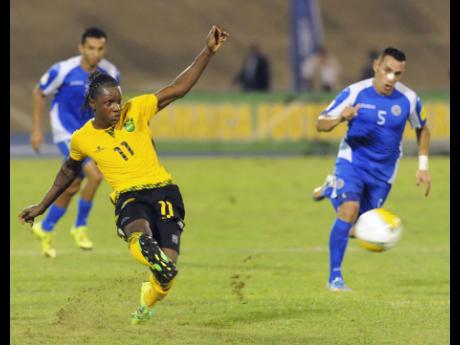 National striker Darren Mattocks, who has scored in his last four internationals, including both legs of the Boyz's two-way World Cup qualifier against Nicaragua which ended with the second-leg in Managua on Tuesday night, said when they saw five minutes remaining on the clock their hopes of a comeback had dried up.

"When I saw 86 minutes, that's when doubts started to creep into the back of our heads. We knew we were going to get the goal. Even if it was the 93rd minute, we knew could get a goal. But we didn't play as if there was any doubt, and that's why we got the goal," he admitted.

The in-form forward noted that all his recent goals for Jamaica have been scored in very important, high-profile games and he wants to continue building his reputation as a big-game player and matchwinner for Jamaica in the qualifiers.

Mattocks also had goals in the Gold Cup semi-final and final.

In Tuesday's game against Nicaragua, the Reggae Boyz, having lost the opening leg 3-2 in Kingston, needed to beat the hosts by two clear goals. Mattock found the opener after 24 minutes.

"We approached the game in a strong manner. We knew the task and that we had to win by two clear goals, but we were pretty confident even though we had players missing; we knew we had a talented bunch," he told The Gleaner.

"We were pretty confident, although we were cautious. But once we got the early goal, we could settle and go for the second one. We got the second goal late, but the most important thing is that we got that goal," he insisted.

The former Bridgeport High and Waterhouse player is pleased with his rich international form.

"As a striker, your main job is to score, and each game I go out I try to put the ball in the net, especially in big games. These (last four internationals) were four very huge games and I pride myself on turning up for big games, and for the last four games I have done that and helped the team advance through the knockout phase of the World Cup qualifiers and that's something I want to continue doing," he stressed.

"The goal in Kingston was just as important; it helped us get back into the tie. We would have been out of the tie if I hadn't scored that first goal, but last (Tuesday) night's goal was just important because it helped us relax and focus on just getting the second goal," Mattocks reasoned.

"Where there is a will there is a way ... the most important thing is that we got the goal and got through," he added.