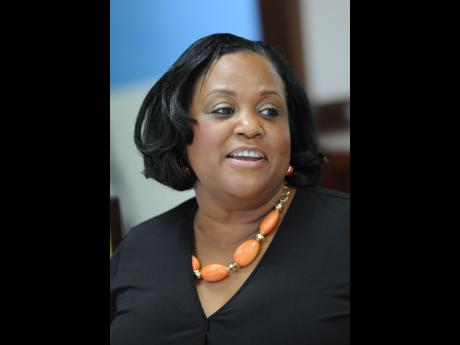 Fifteen hundred sports ambassadors across all disciplines, who sweat, toil and push their bodies to the limit for the cause of national representation, are set to benefit from 'a first of its kind' Jamaica Athlete Insurance (JAI) plan, to be implemented in December this year.

As such, Jamaica's athletes will now be fitted with health insurance coverage tailored to each - their unique needs - for the first time ever.

Appropriation funds in aid of $50 million will go towards providing this insurance coverage.

"Following consultations with the Jamaica Athletics Administrative Association (JAAA), an inter-ministerial committee established by the prime minister to include the Opposition and members of the athletes' fraternity, it has been agreed that we will forego an elaborate celebration (Jamaica's IAAF World Championships success in Beijing) to facilitate the provision of additional resources for athlete development and welfare fund," Minister with responsibility of sports, Natalie Neita Headley, told a press briefing at Jamaica House yesterday.

Having identified that funding from the 2013/2014 financial year, the Government said it intends to protect the country's sports assets.

Requests for proposals for the provision of health insurance were made on August 11 and the deadline for bidders' responses is today.

"Our efforts will continue as we seek to create the best environment possible for the health, well-being, security, safety, high-level performance and prosperity of our sportsmen and sportswomen who bring so much glory and fame to Jamaica," she continued.

Neita-Headley stressed: "The Government remains fully committed to assisting our athletes in every way we can."

The next step will be to have those bids tabled, evaluated and have the process completed, following which actuaries will make recommendations to the Government, which will be expected to award a contract by or in December this year.

The Government also outlined that it will be looking to support the JAAA, through the Sports Development Foundation (SDF).

Looking to the future, it assured that a monthly stipend to a pool of approximately 70 athletes going through the developmental process - for the Olympic Games in Rio de Janeiro, Brazil - in 2016 will be nurtured and financed.

The Government's partners are the Tourism Enhancement Fund, and Culture, Health, Arts, Sports, Education Fund, which joined forces with the hope of making sports investments and its returns a sustained reality.