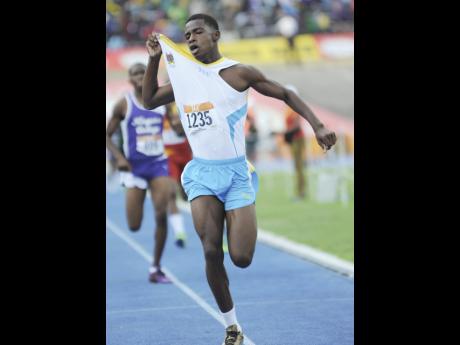 Junelle Bromfield claimed her second gold medal and Jauavney James won a silver, both in the respective girl's and boys' 400 metres hurdles, yesterday, as Jamaica's Commonwealth Youth Games team claimed a record haul of six medals at this year's staging inside the Apia Sports Complex, Samoa.

Bromfield took the gold in 1:00.78, while Jamaica claimed silver in a time of 51.43, as his teammate, Leonardo Ledgister, placed sixth.

As the athletics section of the Youth Commonwealth Games ended, Jamaica finished in style, with four gold, one silver and one bronze. High jumper Lushane Wilson had won a bronze medal.

The team also finished the Games among the top 10 of some 60 competing countries.

St Elizabeth Technical High School's Bromfield was the standout with a double gold in a 24-hour period, while Kevin Nedrick pulled off a stunning win in the shot put.

"It has been a fantastic experience," he said.

The Jamaica team presented Puma gear to a male and female athlete from Samoa as gifts.

Jamaicans will return to action tomorrow, with swimmers Annabella Lyn competing in 800m freestyle and Joseph Black the 50m freestyle.

The team returns on Sunday.