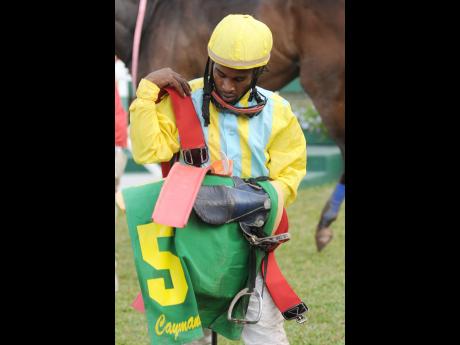 Chatrie withdrew his appeal on Monday, which means his ban should have started on Wednesday. However, a JRC source said the commission exercised its discretion and counted last Saturday as the first day of his suspension.

The in-form jockey ran afoul of the stewards on Saturday, August 29, the second time in a week after first-past-the-post WOMAN IS BOSS was disqualified.

During his interview with the stewards, he allegedly conducted himself in a manner described as "ungentlemanly behaviour" and was deemed not in a mental state to continue riding for the rest of the afternoon.

Chatrie was subsequently stood down from his last two mounts, deemed "a danger to himself and others" and "was in no condition to continue riding" for the remainder of the racemeet, the stewards reported.

"We could not send him back out there," operation steward Eustace Williams said, explaining the panel's reason to stand him down for his two remaining rides on the 10-race card - SEEKING HOPE in the eighth event and STAMP OF AUTHORITY in the nightpan.

"He was in no condition to continue riding," steward Haldene Johansen added.

The following Tuesday, he was slapped with a 10-day ban and fines totalling $20,000. Half that sum was for the infringement aboard WOMAN IS BOSS and the other $10,000 for the previous week's disqualification of BOLD AVIATOR.