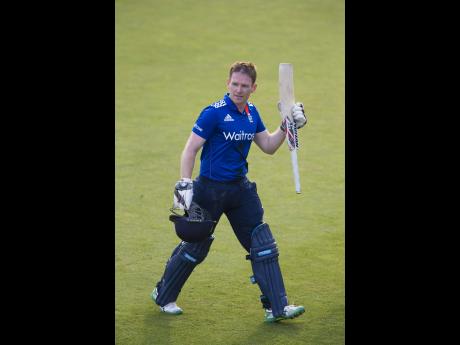 File
England's Eoin Morgan raises his bat as he walks from the pitch after scoring 92.

Eoin Morgan smashed an inspired 92 to help England to a three-wicket victory over Australia in their fourth one-day international yesterday, squaring the series ahead of the final match.

Australia set England a challenging target of 300 to level the five-match series and looked set for victory after half-centuries by George Bailey (75) and Glenn Maxwell (85) at Headingley.

But Morgan turned the match around and key contributions from James Taylor and Ben Stokes, who both scored 41, sent the hosts into the final overs with real belief.

Moeen Ali and paceman David Willey saw England home with a total of 304-7 with 10 balls remaining. The hosts chased down 300 for the first time against Australia and only the fourth time in their history.

Having trailed Australia 2-0, Friday's victory made it 2-2 ahead of the series decider at Old Trafford, Manchester tomorrow.

Though they struggled toward the end of the tourists' innings, England made a bright enough start.

Willey, in for the injured Chris Woakes, earned the wickets of Australia's top-three batsmen, including captain Steve Smith for two.

Joe Burns played on with a half-hearted shot in the third over, before Willey sent an in-swinger into Smith's back pad for a leg before wicket decision. Jonny Bairstow then held Aaron Finch's thin edge as England looked to be taking control.

But a dropped catch in the 10th over, when Jason Roy failed to hold on to Maxwell's edge, proved costly with the batsman then only on six.

Maxwell was eventually bowled by Ali after attempting a reverse sweep to leave Australia on 167.

Having entered the last 10 overs on 210-4, Australia lost Mitchell Marsh, Bailey and debutant Marcus Stoinis in the space of 10 balls.

But Australia had an explosive eighth-wicket partnership in hand, with Matthew Wade and John Hastings scoring at better than 10 per over.