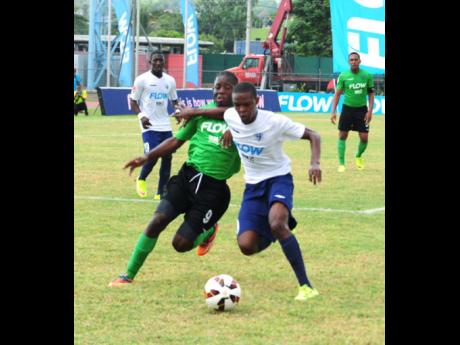 Corey Edmond scored twice as ISSA-FLOW Manning Cup champions, Jamaica College (JC), got their title defence under way with a 2-2 draw against Calabar High in their Group A season-opening match at the Montego Bay Sports Complex yesterday.

The champions led twice, but allowed Calabar back into the contest each time to leave their head coach Miguel Coley seething.

The champions, featuring some new faces, grabbed the lead in the 28th minute as Edmond, playing in the central striker role, benefited from some excellent flank play to tap home from close range.

He scored his second in the 56th minute with a rasping shot that left Calabar custodian Jahson Nash beaten.

Calabar struck their first goal through Scott Moodie in the 47th minute, when they had equalised for the first time.

The Red Hills Road-based Calabar found a second equaliser through Romain Rallyns. His fortuitous shot barely crossed the goal line, but the referee signalled that the ball had gone into the goal.

Calabar came within whiskers of grabbing all three points with virtually the last kick of the game, a free kick by Herbert Redman, but the shot rebounded off the crossbar and back into play.

Coley, the JC head coach, was clearly disappointed with the outcome. He told The Sunday Gleaner that he will be working overtime on getting his players into the right mindset.

He said Calabar were allowed back into the contest because of the lack of concentration.

"It was a poor game from us really, but given a draw ... I am happy for the point," said Coley.

"We have a good bunch of players, that I know, but we never had the kind of mindset that is needed in a game such as this. I will be working on that aspect of our game and, for sure, we will get better as the competition moves forward," predicted Coley.

His counterpart, Bradley Stewart, said he was feeling confident of a victory. He said his players looked better than JC throughout the match and his team should have won.

"We created some good chances. We had to come back twice against a good JC team, but it shows that we have quality players who are able to put the ball on the ground and play really good," noted Stewart.

Calabar, although outplayed early in the first-half, never allowed JC much space to play their attacking game and looked good themselves in attack through Rallyns, Herbert Redman, and Kareem Harris in midfield.

On the 90th minute, they struck the crossbar with JC goalie Jahmarli Waite flagging at air in an attempt to save his team suffering an opening-day loss.

Both coaches said they are looking forward to their next assignment to settle their players.