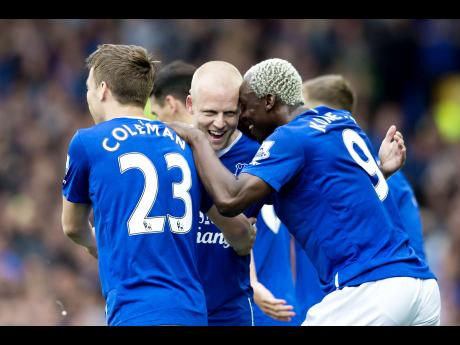 Manchester City enjoyed the perfect ending yesterday in the English Premier League when nothing went right for title rivals Chelsea.

City produced a 90th-minute winner to beat Crystal Palace 1-0 and secure a fifth consecutive victory from as many matches, while champions Chelsea slumped to a 3-1 defeat at Everton that sealed their worst start in the Premier League.

City's 18-year-old, Kelechi Iheanacho, came off the bench in the 89th and poked the ball into the Palace net a minute later. The Nigerian forward played competitively for City only once before, and that, too, was as an 89th-minute substitute, against Watford in August.

To round off a miserable day for Chelsea manager JosÈ Mourinho, there were victories for two other title hopefuls.

The most expensive teenager in soccer history, Anthony Martial, scored on his debut in Manchester United's 3-1 win over Liverpool, and Arsenal comfortably beat Stoke 2-0. Martial's fee from Monaco could rise to €80 million (US$90 million).

After some mediocre early-season form, Arsenal dominated Stoke at Emirates Stadium, and could easily have won by a tennis score. Instead, just two goals from strikers Theo Walcott and Olivier Giroud sealed the points.

There was plenty for United fans to celebrate at Old Trafford, with David De Gea making his first appearance of the season in goal after signing a new contract and Martial signalling his arrival with a superb solo goal to make it 3-1.

Daley Blind and Ander Herrera had United up 2-0, when Christian Benteke pulled one back with a stunning overhead kick in the 84th. Martial then weaved through the Liverpool defence to seal the result.

Watford won their first league match of the season, 1-0 over Swansea, despite being reduced to 10 men. Striker Odion Ighalo scored in the 59th, but five minutes later, Valon Behrami was sent off for a violent tackle on Andre Ayew.

Wes Hoolahan inspired Norwich to a comfortable 3-1 first home-league win, making one goal and scoring another against Bournemouth, while West Brom drew 0-0 at home to Southampton.

Chelsea are 11 points behind City, who were also revelling in a five-point lead over United and Arsenal.