‘Fortune’ all the way 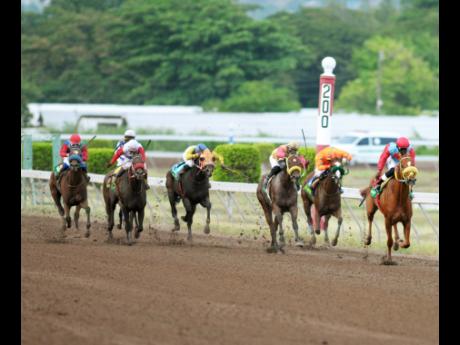 FORTUNEONEHUNDRED underlined his well being with another post-to-post victory in the second running of the Saint Cecelia Cup Open Allowance feature at Caymanas Park yesterday, the American five-year-old gelding winning by five lengths in the fairly good time of 1:19.0.

With title-chasing jockey Robert Halledeen riding for champion trainer Wayne DaCosta, FORTUNEONEHUNDRED broke smartly from the number-one position and quickly established an early lead over the three-year-old filly, MOM's STUDENT (5-1), and the 50-1 outsider, LADY SHANKARI, in a field of nine.

Coasting into the straight (rails) some three lengths clear of MOM'S STUDENT and TRADITIONAL PRINCE (7-2), he kept on strongly under the right-hand stick to win unchallenged, notching his second consecutive win over the distance following his fast-time win (1:17.3) in the Seek Exercise Book Room Trophy on August 15.

PETE'SWILDONE (5-1) finished strongly from off the pace to beat TRADITIONAL PRINCE for second, while TIMEFORARMS (8-1) stayed on for fourth.

DaCosta, who is safely on course for a record 15th trainers' title, which would surpass Philip Feanny's long-standing all-time record of 14, said FORTUNEONEHUNDRED has improved this season and the victory was expected.

"He won the Seek Exercise Book Trophy over the distance in a fast time some weeks ago and, having followed up today, has now graduated to grade one company," he said.

"We will weigh our options in the coming weeks, but the Gold Cup, which has been brought forward to mid-October to pave the way for the rich Diamond Mile on December 5, looks a tempting proposition given his style of running," said DaCosta, who won this year's derby with SEEKING MY DREAM and the 2000 Guineas with ALI BABA.

According to the trainer, he would love to see FORTUNEONEHUNDRED taking his place in the field for the $13.5 million Diamond Mile.

"His participation could come down to lifetime earnings, but I am hopeful he makes it," he said.

As far as the Diamond Mile is concerned, DaCosta had some issues.

"It should be run as a handicap race."

He asked: "How on earth can one explain the fact that a horse like Pete'swildone will be allowing weight to Typewriter, Perfect Neighbour, and Commanding Chief?"

Leading jockey Shane Ellis rode two winners in BRAHMOS and BARS OF GOLD, both at odds of 5-2, to inch away from closest rivals, Robert Halledeen and Omar Walker, in the jockeys' championship. Ellis pushed his season's tally to 60 wins - ahead of Halledeen (56) and Walker (52), who both logged one winner each.

All, however, were overshadowed by in-form jockey Paul 'Country' Francis, who rode three winners on the card, including NEVER GIVE UP, who finished in a dead heat for first with the favourite FRANKENSTORM.