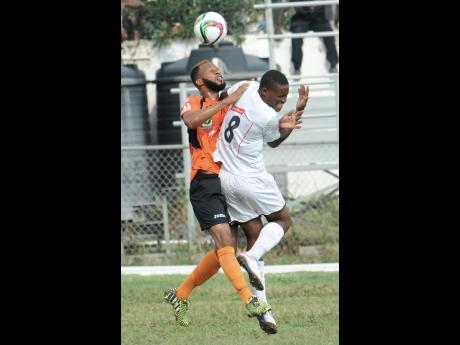 It could be a case of jumping out of the frying pan into the fire or from the fire into the frying pan, depending on how you look at it, when the newly-promoted UWI FC go up against last year's beaten finalists, Montego Bay United, today in the Red Stripe Premier League (RSPL).

The newcomers faced a fiery baptism in their opening game of the season as they played away to defending champions Arnett Gardens and were punished 3-0.

Their experience this week could be similarly scathing, as they come up against Montego Bay United, who are smarting from a 0-2 loss on the opening day to the other promoted team, Portmore United. Anything but a win for Montego Bay United could be cause for serious concern at the club.

"We will have to score some goals. We have not scored any goals in our last four games, including those played in the CONCACAF Club Champion-ships, and have conceded about eight. That is not a good report, and we have to fix this," Montego Bay United's director of football, Dr Dean Weatherly, said of his team's performance.

"Training was very militant, very businesslike; everyone knows what is at stake. We conceded too many goals, lost too many games and have not scored any goals, and I am sure they will approach the game from the perspective of righting all those wrongs," stated Weatherly, who presided over the club's title success and last season's runners-up spot in the League.

Marcel Gayle of UWI FC is not overawed by the opponents or any team in the League for that matter.

"Basically, we have been training hard all this week, trying to perfect what we do. We want to get it right from minute one and keep our concentration. With that, we will be fine," said the man who created history by guiding the university team to top-flight football for the first time.

"If we play the best (teams) in the first four matches, and if we can get some positives out of those, then it can only get better for us," Gayle reasoned.

"I will go further; our squad is a good integration, so the synergy will come out at the end of it. We have a lecturer in Dr McMorris, we have current students, future students and other players who have come with the experience from other clubs like Dino Schaffe (Cavalier), Kemar Flemmings and Jamie Robinson (Tivoli Gardens)," Gayle added.

For Montego Bay United, the attacking duo of Dino Williams and Allan Ottey will have to produce, while the defensive pair of Ladale Richie and Cordel Simpson will have to provide cover for the towering Jacomena Barrett in goal, if they are to get their desired result.

In other games, Boys' Town and neighbours Tivoli Gardens will battle it out, while Humble Lion will host Harbour View and will try to give their fans something to smile about following last week's loss to Reno.

Portmore United will look for two wins in a row when they tackle parish rivals Rivoli United, while Waterhouse will be aiming to prevent Reno from recording their second successive win.