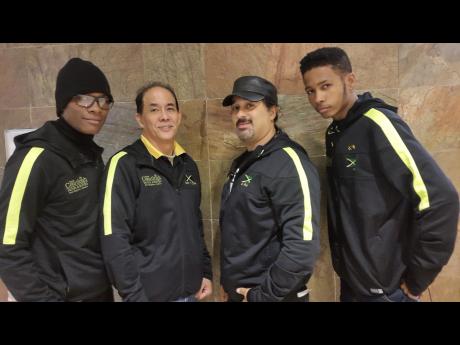 NICHOLAS Dusard struck gold in Russia last weekend when he beat Russia's Alexander Leonov in the lightweight final of the Intercontinental Cup of Taekwondo in Siberia.

Dusard beat Germany's Ibrahim Guelhan to reach the lightweight final against Leonov. His victory made him the first Jamaican martial artist to win gold in a major tournament on Russian soil, continuing his successful comeback from injury this season.

Up against the best

The victory propelled Dusard's combined team ranking, following his bronze-medal performance at the International Taekwon-Do Federation's World Championships in August. He had previously won gold against old rival Julio Carlos on the International Sports Karate Association's Night of Champions at the US Open in July.

"We were up against the best in Europe and knew it was always going to be hard. It has been great for me. Coming back from injury, with doubts of making the combined team, to be victorious in Russia was great," said Dusard, who was coached by Claude Chin.

Meanwhile, Calabar's Webb Jr showed his class on his first call to the combined team. He defeated Germany's Artem Gurdzhi in semi-final action, before going down to Russia's Vadim Volikov in the final.

"The first fight wasn't really hard, but the second fight was a challenge. The guy wasn't really good on his legs, but punched really hard. I lost mainly on aggression punches. I was scoring points, but the judges didn't go my way," said the 17-year-old coached by Jason McKay.

"I am returning home to work on more fitness and flexibility to have more control over my body. I feel great. It was a victory for me. I am thankful for coach to have put out a lot of effort in preparing me for this event," he added.

"Bearing in mind it was his first European competition and we only had him for six weeks, his inexperience showed. But it was an extremely spirited performance by the youngster,'' he said.