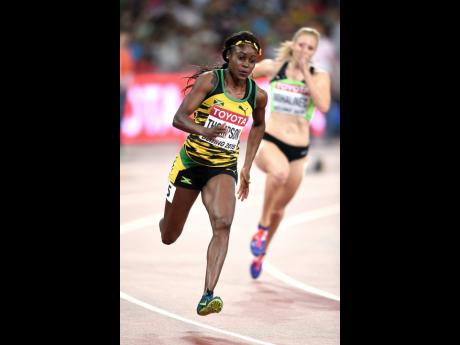 Last year this time, Elaine Thompson was competing against college girls, with little expectation of the dizzying heights to come.

It could, however, have all gone so wrong for the young University of Technology (UTech) student, whose talent may have been lost had it not been for a stern talk and an ultimatum of sorts, which turned 'troublesome potential' into World Championships silver-medal class.

The year 2015 was a breakout for the 23-year-old hospitality and tourism major, but it would not have been the case if it wasn't for a life-changing chat she had with her coach, Stephen Francis.

Thompson, who told The Sunday Gleaner that she will go fully professional next season, while maintaining her studies at UTech, laughed when asked: "We heard you were a bit of a troublemaker?"

"It depends on what you call trouble," she smiled.

Running with the big girls

She would not go into details about the conversation with Francis, but hinted that it came after a bit of mischief and less-than-ideal execution and application on her part, with a poor performance at a track meet, tipping coach Francis into his sermon, or warning - or whatever it was.

"He (Francis) spoke to me and I took what he said in consideration. I knew he was saying the right things. I knew that I needed to listen," said Thompson, who ran her last 200m of the season in Brussels on Friday, where she finished third in 22 behind World champion Dafne Schippers, 22.12, and Olympic champion Allyson Felix, 22.22.

"I went to a track meet and didn't do too well and he basically took me to the side and gave me a speech that really motivated me and changed my life," Thompson shared. "I can't say (exactly what he said), but he basically said that I was not in high school anymore and I needed to take things more seriously; that I needed to realise that I am running with the big girls now, so it pushed me to take it seriously."

That's exactly what she has done.

Thompson, hardly a blimp on the track and field radar in 2014, was flickering from her first few strides this season with her 11.10 run at the Intercollegiate Championships in March, raising a few eyebrows.

By the time May had ended, she was blazing hot with three sub-11 seconds clockings in the 100 metres and a 22.32 200-metre time to her name. She duly capped her meteoric rise with a silver medal in Beijing in a time of 21.66, which makes her not only the second fastest Jamaican ever, but also the fifth fastest ever to run a 200m.

Not to mention being the face of an islandwide campaign by one of the country's premier financial institutions. Not bad for a girl from Banana Ground in Manchester, who went through Christiana and then Manchester High before enrolling at UTech with very little fanfare.

"Honestly, I didn't expect this at all. When I ran at the Intercollegiate meets and opened with 11.10 earlier this year, I said to coach that I think I ran too fast, but he told me that I still had a lot in store so I shouldn't worry. I was nervous at first because I didn't know what to expect after running so fast so early, but I continued to focus on working hard," Thompson said.

"I wasn't known, but I kept working hard and focused on training and, I guess, now you can say that I am a superstar, and it's really something to motivate others. For instance, persons who doubt themselves, it's a motivation to them. People can look up to me as a person who moved up from being an unknown," Thompson added.

It's only the beginning for Jamaica's latest sprinting gem and as she gets accustomed to the rigours of top-level competition and the high expectations that follow, Thompson says she welcomes the thrill of her budding rivalry with Schippers, Felix and maybe even her own training partner and someone she holds in high regards, multiple World and Olympic champion, the reigning queen of sprinting, Shelly-Ann Fraser-Pryce.

"Next year, I expect great things as well. I have already experienced running with these ladies so I am more prepared. It will be a big year for me, and next year, it's just about preparing for them again," said Thompson. "Yes, I am looking forward to the rivalries. Now I am considered a top competitor and people are looking out for me at the meets, and that's exciting.

"To compete with these ladies certainly pushes and motivates me to work harder. It helps me to prepare and, as you know, next year will be the Olympics and, for me, it's good to get a feel of this type of competition now, so I can be better next year," she added.

She will close out the year with a 100m in Rieti, Italy, before returning home to classes and a two-week break from training.

"Yes, I only get two weeks rest and then I resume training, so there will be no vacation really," Thompson half-smiled.