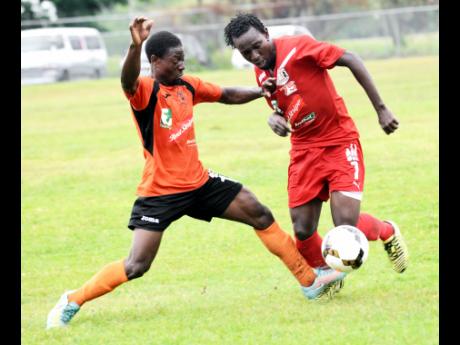 The two sides of Jermaine 'Teddy' Johnson were highlighted during  10-man Tivoli Gardens'  1-1 draw with Boys' Town in round two of the Red Stripe Premier League  at the Barbican Complex yesterday.

Boys' Town who are utilising the Barbican Complex as their home field while the Collie Smith Avenue ground is being resurfaced, took the lead through Kimarley Fray two minutes after half-time break but Tivoli found the equaliser through Miguel Ricketts four minutes later.

However, it was the behaviour  of out-of-favour national midfielder  and Tivoli captain Jermaine Johnson, that took centre stage as the player was sent off in the 75th minute.

After a slow start Johnson gradually got into his game and was a handful for Boys' Town's defenders especially national full back Xavian Virgo.

But at half-time, the controversial player got into a verbal clash with a spectator and attempted to jump the perimeter fence to confront the Boys' Town supporter.

Boys Town's goalkeeper, Kirk Porter, in an effort to quell the dispute, was pushed to the ground twice by the former Bolton Wanderers player. The Boys' Town spectator was also attacked by a group of  opposing fans.

On the resumption of play Boys' Town  went ahead in the 47th minute when Fray headed home from Virgo's free-kick.

But Johnson showed why he is one of the most feared attackers in the league as his dribble opened the Boys' Town defence and Nickoy Christian crossed to Ricketts who slammed in the equaliser.

However, 15 minutes from full time the player was fouled and not given the call, and he proceeded to verbally abuse the referee who responded by showing him the red card.

Johnson's behaviour did not go down well with most onlookers with coach Christopher Bender calling it 'unacceptable'.

"It is unacceptable. It is something that we have to talk about, we have to sit him down and let him know that as the leader of this club I will not tolerate or accept behaviour like that," he stated..

"He's the captain and he is my friend but you have to put friend aside, we have to know how to conduct ourselves. We look up to you, you play overseas so you have to carry overseas professionalism  here and guide the youngsters," Scott said.

Boys' Town's coach Andrew Price said he will have a word with the player.

"Jermaine is a talented player and even at his age he has to be given the type of respect he deserves. But he and I are good enough friends and I will have a word (with him) about what happened today," Price said.