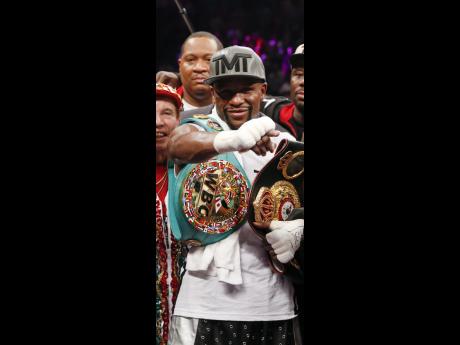 His career winding down to its final seconds, Floyd Mayweather Jr took a victory lap around the ring, his fist raised in triumph.

After 19 years of perfection in the ring, he deserved one final bow.

Mayweather capped a remarkable career with a typical Mayweather fight Saturday night, using his defensive wizardry to frustrate Andre Berto on his way to a decision so lopsided, one judge gave him every round.

The $32 million he earned was pocket change compared to what he got for Manny Pacquiao in his last fight. But the more important number was win No. 49 in the final fight of his unblemished career, tying the mark of the late heavyweight champion, Rocky Marciano.

"You gotta know when to go. I've had a great career," Mayweather said. "I'm leaving with all my faculties. I feel like I'm smart and sharp."

Mayweather wasn't about to change what he does best in his last fight.

Both dominant and defensive, he used all the tricks learned in a pro career that began in 1996 to take a unanimous decision over Berto and retain his welterweight titles in what he insists was his final fight.

Mayweather won yet again in a fight where he was chased but never really tested. He piled up points with a sharp jab and quick counter punches, leaving Berto swinging at air most of the night.

By the late rounds, Mayweather was both talking to Berto (30-4) and taunting him, secure in the knowledge he was winning big against the 18-1 underdog.

The ringside scorecards reflected Mayweather's dominance, with one judge scoring a 120-108 shutout. The other scores were 118-110 and 117-111, while The Associated Press had Mayweather winning 119-109.